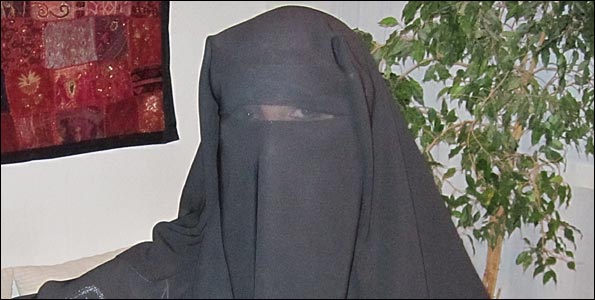 Chrystelle Khedrouche is 36 and lives in a suburb just outside Paris. She has been wearing a burka in public for around 12 years. She is French-born, has five children, and is married to an Algerian. She is a convert to Islam.

These are her views about the proposed ban on wearing the burka and niqab in public places:

"I'm really very sad about this, but I'm not so surprised because it is part of the French mentality, but it makes me sad and it's hard that this is the stage we have got to. It's been several years that we live like this and we have been perfectly fine, but then I'm not so surprised because the French like the idea of everyone being of the same mould and that mould must be ideal. Everything that is not part of their ideal model doesn't suit them."

Polls suggest that a sizeable majority of French people support a ban.

"This is a political strategy. It is always easier to knock the Muslims because all French people are in agreement about it."

Isn't it through the face that human beings relate to each other? It is the most basic way of communicating?

"Do you think we do not have contact with people? No, I don't agree with that at all. Throughout this debate we have heard lots of excuses. I disagree. I did my studies in communication. I know that if I smile on the telephone a smile is heard. For me, we can have human contact and a piece of cloth will not stop this contact. I don't agree that human contact is established through the face. I still have human contact, it doesn't change anything."

Many Muslims say that nothing in Islam requires women to wear the full-face veil.

"It saddens me a lot because our community is not united enough. For me there is no difference between myself and other Muslim women who show their veil, their hair or show their full head; there is no difference between us. But to say that it is not part of our religion I find very difficult, because we know that the wives of the prophet were dressed like this, they were fully covered.

What would you do if the ban becomes part of French law?

"Am I ready to break the law? It's been 12 years that I have been like this. Yes, I am ready. In fact I can't accept the fact that the French fight for the freedom of women. I believe a woman should be able to dress as she likes, so I do not understand why they want to stop me from dressing as I want. I have made a choice to dress like this and I have made the choice not to be unveiled, so to force me to unveil - that's not freedom."

What happens if you are fined for breaking the law?

"If we are stopped we do not have any intention of paying fines - that is sure. I personally will not pay a fine and I think there are lots of women who will not pay. I find it terrible to stop someone for the way they dress and it is against European laws. First they say they will introduce a law, now it is a decree, a resolution...

"They know that it will go against the European constitution. I don't know where this will lead, but they cannot arrest us in front of our children, we have done nothing wrong."