EU jobs race could be marathon 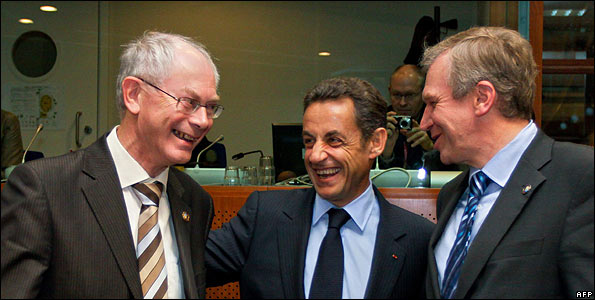 All the signs are out there that the European Union cannot agree on who should fill the top jobs that are supposed to define its future. The first hints are being dropped that the Thursday night dinner, where the 27 heads of government are supposed to chose a president and foreign policy chief, might extend into Friday morning breakfast or even beyond.

As each day passes new names surface and flash briefly across the screens of those following this race.

Late last week the Swedes were briefing that if the dinner were held immediately the Belgian Prime Minister, Herman Van Rompuy, would get the job of President of the European Council. He was the low-key figurehead favoured by the French and the Germans. But in this game of horse-trading it is dangerous to get out in front.

Once Van Rompuy had become the established favourite attention turned to his record. There was his successful deal-making in Belgium which limited antagonisms between French and Dutch speakers. What was less clear was his vision for Europe.

Some find this whole secretive process disturbing. Names are tossed around without Europe's voters being able to hear from them or to assess what they stand for. It prompted Vaira Vike-Freiberga, a former Latvian president, to demand that the EU "stop working like the former Soviet Union... in darkness and behind closed doors".

Further research into Van Rompuy soon revealed that at a meeting of the shadowy but influential Bilderberg Group he suggested EU-wide taxes might be needed to support the expanding EU budget. His party seems to favour the gradual replacement of national symbols with EU symbols. The revelations at once make him a controversial choice with sections of the European electorate. It could even make it difficult for some countries to support him.

It is in this context that the candidacy of Tony Blair still flickers. Without an agreed
candidate for president there could be a vote and the former Labour leader might still come through. Certainly the British government is still pushing his name.

There are signs that others, like the Poles, believe that potential candidates need to be heard from. The Swedes, who hold the rotating presidency, say it is impossible to open up the process because many potential office-holders hold power and to run for a European job would undermine their standing back home.

So, in this vacuum, other names are touted. Their merits are weighed less in terms of how they would perform but more as to how they would affect the balance between political groupings and small countries versus large countries.

Meanwhile from the sidelines are voices reminding Europe's leaders that the rest of the world is watching. This from a state department official in Washington: "It's up to post-Lisbon Europe to put its house in order in a way that would allow us to be effective partners. Europe's choices in the coming months are going to be very important."

As I said yesterday, Europe's leaders long for greater influence but fear any diminution of their own powers.