The lesson of today is this: You can never be entirely certain that President Klaus of the Czech Republic will sign the Lisbon Treaty until he actually does. 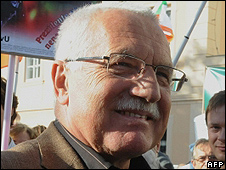 Yesterday the Czech Prime Minister Jan Fischer and the Czech Europe Minister Stefan Fule confidently predicted their president would sign the treaty by the end of the year or even sooner.

Today the Swedish Prime Minister Fredrik Reinfeldt, who holds the EU presidency, managed to get hold of the Czech president on the phone. He had been trying to have the call since the Irish voted "Yes" last week. Vaclav Klaus told the Swedish PM that he would abide by the ruling of the Czech Constitutional Court - which has not come yet. Then he dropped his bombshell. He wanted a footnote added to the treaty in relation to the EU Charter of Fundamental Rights.

It is fair to say that no one knew about this condition, including ministers in the Czech government. They certainly did not know about it in Brussels. And President Klaus wants the European Council - the EU leaders - to take a decision on the footnote.

Now we don't yet know what this footnote contains. It would need all 27 countries to agree to it. There could well be arguments over it that could prolong the whole process. However it may be the president's escape clause, so that he can demonstrate he got something out of Brussels.

But today's intervention will fuel unease that the Czech president is unpredictable and that it is unwise of Europe to try and read his mind.