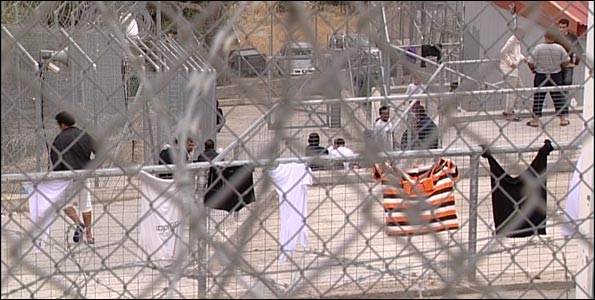 On a hill above the town of Samos in eastern Greece are a series of long buildings with grey walls and red roofs. They could be a barracks but this is a detention centre for immigrants. It was built to hold 300 people. Today, 473 are held there. Fifty-three are women and 10 are under the age of 18. They live behind barbed wire and wait. They stay for between one and three months, their frustration gnawing away at them. These are people who have made long, often dangerous journeys to reach the shores of Europe.

Within minutes of us starting to film through the wire a young man in a red football shirt detached himself from a group and shouted out to us. Clinging to the wire fence he said he was from Somalia but looked as if he had come from West Africa. He demands to know why he is being locked up. "Why?" he pleads with me. In a refugee centre in town someone has written on a wall: "They don't let us come. They don't let us stay. They don't let us go."

A few claim asylum but that is no longer a popular option. It can tie up a migrant for months. In Greece only 0.1% of asylum seekers are successful compared to 76% in Finland.

The common story is that after a month or so they are transferred to a detention centre elsewhere in Greece. They are eventually freed and told they must leave the country within a month. The vast majority head west to other European destinations.

The UK remains the favourite country. In London they can find their own community which will provide them with work often in the underground economy. It is an abiding belief that the British will eventually allow them to stay. There is another factor that drives them west: Money. Those from Afghanistan are often in the hands of powerful and dangerous traffickers. Some in the camp here in Samos say that it costs the equivalent of £16,000 to get from Afghanistan to Britain.

Often their families back home have sold houses to pay the people smugglers. Some will have to pay the networks from whatever they earn in London or other European cities. Without work they and their families are at risk from the traffickers. They owe a debt and will not be deterred by officials or laws. One lawyer looked at this camp and said there could be £4m of business right there.

The Greeks know that they are, in effect, just passing on the problem but, in their view, they are overwhelmed. They want the rest of Europe to start taking a share of those who arrive on Greek shores. That is unlikely to happen soon. It is difficult for any country to take a quota of immigrants determined by others. In any event some fear that a quota system would only encourage others to head to Europe.

Immigration is a major issue for the European Union. The current plan is called the Stockholm programme and the aim is to have it approved by the end of the year. The
intention is to beef up border patrols by giving more money to Frontex, the relatively new body that operates planes and ships.