Where is the anger?

Berlin: On my way out of Berlin I drove past the Victory Column beside the Tiergarten. The election was over but some large posters of Angela Merkel remained.

Some of the posters had been defaced. It wasn't clever or witty graffiti, just some red lines scrawled over Merkel's face. The slash of a pen. I had seen a few other posters in the former East Germany where the Chancellor had been given a moustache, but they were rare. And then it struck me. Where, in the midst of the worst recession since World War II, was the anger?

Back in January I had gone to Paris for a union demonstration. It was colourful, good-natured but ended with the almost ritual confrontation with the riot police, the CRS. The whiff of tear gas drifted down the boulevards. At the time commentators were predicting weeks of rage on the streets of Europe. The cobblestones, however, have largely stayed in place. 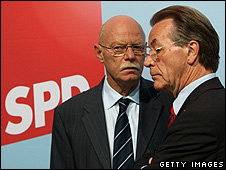 Across Europe the generation leaving universities and high schools are facing long periods without jobs. And yet, certainly during the recent campaign in Germany, their frustration was missing.

One would have imagined, certainly in the past, that this would have been perfect time for the socialist and centre-left parties. People have been questioning the future of capitalism. The international financial system was reeling. Stories of greed filled the papers. And, yet, so far, the voters have not turned to the left.They did not at the European elections, and in Germany the Social Democrats (SPD) have just posted their worst result in 60 years.

The centre-left has failed to find a script to address the recession. Many of their clothes have been stolen by the centre-right. It was Merkel and Sarkozy who led the charge against the excesses of the "Anglo-Saxon" model of capitalism. Angela Merkel went to the recent G20 summit determined to cap the bankers' bonuses. Furthermore, the right seems to have accepted the "active state". In Germany, Merkel agreed to subsidise workers to keep them in jobs. She was willing to plough in $6.5bn to keep the Opel factories open.
And elsewhere, too, the centre-right has moved into territory that formerly belonged to its opponents. In Britain, David Cameron positioned himself as a "green" leader, concerned with climate change. The National Health Service, he insisted, was safe with him.

While in Germany I discussed some of this with a political analyst. She said the centre-left stands for pumping money into the public sector, but everyone now knows the biggest challenge is how to cut the deficits, in other words, to cut public spending. New jobs are most likely to be created, in the near future, in the private sector.

Furthermore, the centre-left cannot depend on traditional loyalties. Voters who regard themselves as independent are increasing. Ties with the only working class have weakened. The centre-left has been uncomfortable addressing the problem of job cuts while significant immigration from outside the European Union continues.

Some are talking of the end of socialism and its centre-left allies. It certainly is struggling to find a message. It may, however, be premature to write off the left. Politics often goes in cycles, and parties often rebound because of the failings of their opponents.