The capital of Europe?

BRUSSELS: A city that divides. My predecessor had a soft spot for it; others before him could not wait to shake it off, like some minor complaint.

Other colleagues have spoken fondly of three years hanging out with an international crowd, as if on some vast ski slope, where almost everyone is visiting.

Yet, in my first days in Brussels, a magazine admitted that for many the city was "an assignment to be endured".

And I have detected those differences in the reactions to my appointment. Some have seemed genuinely excited on my behalf at the prospect of covering Europe with its variety of stories and intrigues. For others, the very dateline "Brussels" is a stain that can damage a career.

I have, of course, been to Brussels before - but this time, I looked at it with different eyes. Arriving in what they call the European Quarter, you feel you've entered a vast civil service encampment. A bureaucracy spread among 60 buildings - 30,000 bureaucrats, 10,000 lobbyists and several thousand interpreters. There are more ambassadors here, apparently, than there are in Washington DC. All feeding off the deluge of directives and regulations.

I had expected that the Belgians would unreservedly welcome this army, with its recession-proof spending power. Most probably do but here, too, I detected different views.

On my second day in the city, a taxi driver was taking me down Rue Archimede when he exploded with a loud scoff. He pointed at a board outside a restaurant. Several moules dishes were advertised for 25 euros (£22.50). The price outraged him. He assured me that if we crossed the French border we could get moules for nine euros. Lurking behind his observation was a resentment at what he referred to as an elite, immune from the recession. "It's the price we pay for being the 'Capital of Europe'," he said with a weary shrug. 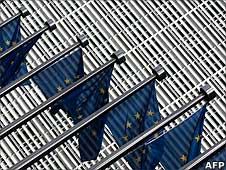 Therein lies part of an enigma. Brussels may sometimes act like the capital of Europe, but of course it is not. Yet diplomats swarm here and the European Union has its founding fathers. Buildings and streets are named after them: Robert Schuman, Konrad Adenauer, Alcide de Gaspiri, Paul-Henri Spaak: names that almost certainly would draw a blank in most British bars. As far as I know, these statesmen have not left behind great rhetoric or writings and yet they set in train - whatever your standpoint - a vast spreading of democracy.

For all that, as I set out as Europe editor, I detect uncertainty. Last year, I covered the Obama campaign. It was marked by its confidence and boldness - by the overpowering sense of the tide of history changing. The sense of purpose in Europe, at first sight, seems less clear.

You feel it in the anxious and oft-repeated enquiry "You do like Brussels?" which I can't ever remember being asked in Washington. No-one any longer speaks of any grand project that might excite and inspire. There is a feeling that, during the recession, Europe did not act from a common position. Nations, as they always have, sought their own solutions. I detect it in the reaction to the small turnout at the European elections. Enthusiasm for enlarging the European Union seems tepid at best.

Shortly, I will travel to Ireland for its referendum on the Lisbon Treaty. There is palpable anxiety in Brussels that the people, given the chance to express an opinion, might reject it again.

So for me it feels an intriguing time to be in Europe. The EU is on the edge of change. It faces vast challenges. How to connect its institutions with the people of 27 countries? The migrants that wait at its doors. A spluttering economy. The young, restless without work. The threat of climate change. The race to save fish stocks. The fragility of energy supplies.

All rich territory for any journalist.

And I hope, once the assignment is done, to find my own answer to the question "What is a European?"