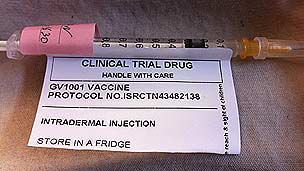 There is rarely positive news about pancreatic cancer. It has the worst survival rate of all common cancers - worse even than lung cancer. Patients are usually diagnosed late when the cancer is inoperable. Typically, patients often have less than six months to live, and unlike other cancers, there has been little improvement in long-term survival in the past 40 years.

So it is heartening to report on a late stage trial involving hundreds of patients with advanced pancreatic cancer. You can see my TV report here. It is not a new form of chemotherapy, but a vaccine trial. Most vaccines are used to prevent infection, but therapeutic cancer vaccines aim to treat disease by stimulating the immune system to recognise and target the cancer.

The TeloVac trial involves more than 50 hospitals, is funded by Cancer Research UK and coordinated by Royal Liverpool University Hospital. It is a Phase 3 trial, which involves comparing the new treatment to standard therapy, and is essential before any new therapy is licensed.

The scientists and doctors involved in the TeloVac trial are keen not to raise the expectations of patients. In earlier small-scale trials, some patients did have a prolonged life-expectancy of several months. But until the results of this major trial are known it won't be clear whether this was anything to do with the vaccine.

But the idea of using the immune system to fight cancer is taking hold. Cancer Research UK pointed to two examples in the past year. Firstly, a vaccine using cancer cells mixed with a patient's own immune cells, was shown to be capable of prolonging survival in patients with advanced prostate cancer. Called Provenge, it is now licensed for use in the US. Scientists also found that an antibody, ipilimumab was able to prolong survival in patients with advanced melanoma, a deadly form of skin cancer.

The doctors in Liverpool are delighted with the take-up of the TeloVac trial, which is almost finished recruiting the 1,110 patients needed. I met three of the participants, Rhona Longworth, Joan Roberts and Charlie Williams. All had advanced pancreatic cancer and were having treatment at the Linda McCartney Cancer Centre. All showed determination and good humour in the face of this devastating disease.

They told me the vaccine had few side effects and they remained hopeful, both for themselves, but also for others in the future, who might benefit from their participation. My thanks to them and all the nurses and staff involved - I'll keep you informed about how the trial is going.