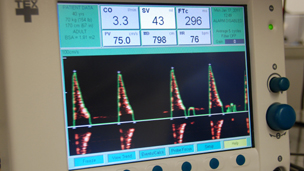 How can the NHS speed up the way it spreads good practice? That is a key issue which emerges out of new guidance from the health watchdog NICE to hospitals throughout England.

It has strongly supported the use of a blood flow monitor during major surgery which reduces complications and speeds the recovery of patients. You can read more about the story here and the full guidance from NICE.

This is not the first time that the monitor has been shown to be effective.

Over the past decade there has been a steady flow of clinical trials and assessments which have demonstrated that it benefits patients and budgets. In a cash-strapped health service it is worrying that the NHS is taking so long to adopt good ideas.

Professor Monty Mythen, from University College Hospital London, which has been using the monitor for 15 years, said it was partly down to what he called "silo-budgeting".

He said: "The cost of the probe - about £100 a time - comes out of the anaesthetics budget. That is a big extra cost. It saves £1,000 in the weeks to come but that saving goes to the surgical budget." This suggests a worrying lack of joined-up thinking.

Of course patients have no idea whether they have had their blood flow monitored using the ultrasound machine, because it is introduced into their oesophagus when they are under a general anaesthetic.

But surgical teams and hospital managers have a duty to ensure that proven technologies which benefit patients get used - especially when they also save the NHS a huge amount of money.

Perhaps we might one day see patients demanding the use of such medical devices in the same way cancer patients have demonstrated over the refusal to give them new therapies.