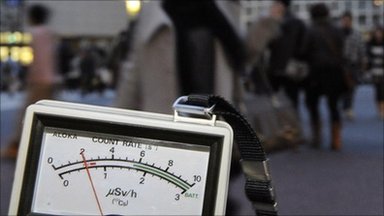 It is not surprising that many people in Japan are deeply worried about the potential health threat from the radiation leak at the Fukushima nuclear plant. The earthquake and subsequent tsunami produced tangible, visible destruction whereas radiation is an invisible danger.

The images of families being screened for contamination by workers in protective suits add to the sense of alarm. So what are the risks at present? Scientists I have spoken to say we cannot give a clear answer yet because we don't know enough about the amount and type of radioactive material that has leaked. Nonetheless, most experts seem to suggest the danger to the public is low.

To start with, some background on radiation exposure which is measured in the unit known as sievert. This quantifies the amount of radiation absorbed by human tissues.

It is worth pointing out that everyone gets exposed to radiation, all the time. This is from the air, cosmic rays, food, water and so on. The levels are very low.

The average annual background radiation dose for individuals in the UK is 2,200 microsieverts.

So how does that compare with what is happening in Japan? Earlier today, a Japanese minister said at one point, anyone at the Fukushima plant itself would be exposed to 11,000 microsieverts per hour, but this had fallen back.

At another point radiation levels are said to have reached as high as 400 millisieverts (one millisievert is 1,000 microsieverts). That would be 20 times the annual permitted limit for nuclear workers. Clearly it is the small group of nuclear workers remaining at the plant who are most at risk.

For the public there is a 20 kilometre (12 mile) exclusion zone around the plant. People living up to 30 kilometres (18 miles) away have been told to stay indoors. "That would be effective in reducing the chances of inhaling radiation from an airborne plume" said Steve Jones, Professor of Environmental and Occupational Toxicology at the University of Central Lancashire. He said, "We don't know what is in that plume released after explosions at the plant, but the risk would decrease very quickly the further away you travel from the site."

All of the experts I spoke to said the health risks to the public, at present, were low. Professor Jones said if the situation did not get worse then it would probably be impossible to show any measurable health effects on the wider public in the decades to come. Cancer is a key long-term risk from radiation exposure and officials will undoubtedly be monitoring the health outcomes of the population around Fukushima..

So how does the danger compare to the worst nuclear accident in history, at Chernobyl, 25 years ago? The radiation leak in Japan is minute by comparison. At Chernobyl a huge explosion was followed by a fire which raged for 10 days and emitted a huge amount of radiation which spread over a vast area.

In a report on the 20th anniversary of the disaster, the World Health Organisation said up to 4000 people may eventually die from the health effects of radiation poisoning, but so far there had been around 60 deaths. Around 50 of those were emergency workers and nine children who died from thyroid cancer. Children are especially at risk from radiation poisoning because of their developing bodies.

Dr Jim Smith, Reader in Environmental Physics at Portsmouth University and author of "Chernobyl: Catastrophe and Consequences" spoke to me from Kiev. He is part of a team on its his way to visit Chernobyl.

He said: "The Chernobyl disaster resulted in a major release of radioactivity. It was a graphite reactor and huge amounts of radioactive caesium and iodine escaped. It was partly due to the design of the plant - very different from those in Japan."

He said several hundred thousand people worked on the subsequent clean up and decontamination of the plant. Many had received an average of around 100 millisieverts over the duration of their work at the site. Professor Smith estimated that this had increased their lifetime risk of cancer to the extent that for every 100 workers an extra one would get cancer. This is not a risk anyone would choose to take, but he pointed out it was far less than the danger of cancer from being a life-long smoker.

One of the main health effects of the Japanese radiation leak maybe the psychological impact. Professor Jones said the stress of being displaced from your home and the fear of radiation contamination could have serious consequences. And that fear factor extends as far as Tokyo, 155 miles from the nuclear plant. "Even though people in Tokyo maybe completely safe, it is understandable that they are nervous and that can lead to stress and ill-health", he said.