Can smoking be stubbed out? 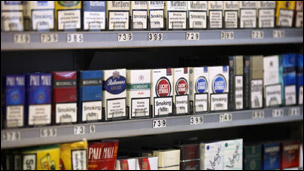 I have just spent the day in Blackpool which has the highest rate of adult smoking in England. Here, 35% of adults smoke, compared with 21% across England as a whole.

If smoking is to be stubbed out then something drastic needs to happen in this seaside town.

I was also staggered by the news that one in three pregnant women in Blackpool smoke - twice the national rate.

We met two mums who smoked while pregnant. One said she was devastated when told her daughter's low birth weight was down to her smoking. But she has still not kicked the habit.

Why is smoking so prevalent here? It is a deprived area with high unemployment.

And put simply, poorer communities smoke more than affluent ones.

"A Smokefree Future", published in 2010, said that until the mid-1950s, socio-economic groups smoked at similarly high rates. Since then, as evidence has emerged of the harm it causes, a wide gap has emerged, and tobacco use is now said to be the primary reason for the gap in healthy life expectancy between rich and poor.

People from disadvantaged groups are less likely to give up than the more affluent or educated. Children often follow the patterns of behaviour set down by their parents and peer groups. It is this cycle of smoking and ill-health that tobacco control strategies need to address.

And Blackpool says it is trying to fight back. Its "Altogether Now" strategy is aimed at encouraging residents to improve their health. The premiership football ground is completely non-smoking and the players are health champions.

Any smoking reduction strategy has to be geared towards the young - around 200,000 young people take up smoking in England each year.

In that vein, the ban on tobacco displays was welcomed by NHS Blackpool.

Jane Roberts, head of tobacco control, said: "Cigarettes are not like Mars bars - children should not see them when they walk into a shop."

But smokers were more dubious about the suggestion that tobacco should be sold in plain packaging.

One worker in a hard hat summed up the mood: "It would not stop me from smoking. I do it because I like it. Plain packaging won't make any difference."

But some did think that removing the brightly coloured logos and trademarks might deter the young.

The government says it has an open mind on plain packaging, but the idea has now gone out for lengthy consultation.

The tobacco industry would fiercely oppose any further restrictions on the sale of what is, after all, a legal product.

Some argue that the measures are another sign of the nanny state in action.

Britain has come a long way since the heyday of tobacco in the late 1940s when eight out of 10 men smoked.

When I first worked at Broadcasting House in London the newsroom had a constant fug of cigarette smoke. I remember one brilliant writer who used to light up a cigar each afternoon as he prepared to dictate the headlines to a typist.

Smoking on the Underground, in planes and in coaches was permitted and tobacco advertising was everywhere. Now you can't light up in a pub or workplace, and a ban on sales of cigarettes from vending machines is due to come in later this year, subject to a legal challenge.

A lot has changed - but 100,000 people in Britain still die from smoking-related causes each year.

The statistics are sobering. One in two life-long smokers will be killed by their habit. Sadly, my mother was one of them.

De-normalising smoking is a key part of discouraging the young from taking up the habit.

And if smoking rates do come down further it will have a dramatic benefit on the health of the nation.