(Another) urine test for prostate cancer 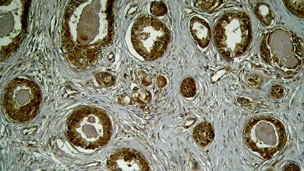 An encouraging development in the diagnosis of prostate cancer - the most common cancer in men. Scientists at the University of Surrey have developed a urine test which - in an early trial - was at least twice as good at detecting prostate cancer than the current test.

Last October, Cancer Research UK scientists in Cambridge also announced early results of a prototype urine test. The CRUK researchers looked at levels of a protein found in urine called MSMB, and in a small study were able to diagnose prostate cancer from urine samples with about 50% accuracy.

The team at the University of Surrey focussed on another protein, Engrailed-2 (EN2) which is made by prostate cancers and secreted into urine. In a study of nearly 300 men published in the US journal Clinical Cancer Research, they found the test was able to detect prostate cancer with 66% accuracy, and with few so-called "false positives" - where cancer was supposedly detected when the patient was free of the disease. The research was funded by the University of Surrey and The Prostate Project charity.

The standard blood test checks prostate-specific antigen (PSA) levels. Among many problems with the blood test are that PSA levels can vary widely between men and at different time. Furthermore, a raised level may indicate other prostate conditions which are not cancerous.

False positives are a significant problem with the PSA test. A raised level may prompt a significant period of anxiety for patients and mean that they undergo a needle biopsy. Here the problem can be false negatives - so a cancer may be missed if the needle does not sample the right area.

Professor Malcolm Mason from CRUK said: "There is a desperate need for a better prostate cancer test than PSA, and this latest candidate, EN2, is very welcome. However, more work needs to be done to find out whether or not EN2 is capable of distinguishing between aggressive prostate cancers that need treatment, and non-aggressive ones that don't. Almost certainly, this new marker would be used as part of a combination of several markers, including PSA.

Both the Surrey and Cambridge urine tests are promising. Indeed there are frequent research papers showing the potential of biomarkers in blood and urine for detecting cancer and other diseases. But most still have a long way to go. A blog in the Guardian last year discussed the problems involved with using these "biological fingerprints" for detecting disease.

Men hoping to benefit from the Surrey research may have to wait some time at the prostate cancer urine test is still experimental. Dr Richard Morgan, senior lecturer in Molecular Oncology at the University of Surrey said: "We are preparing several large studies in the UK and in the US and although the EN2 test is not yet available several companies have expressed interest in taking it forward."