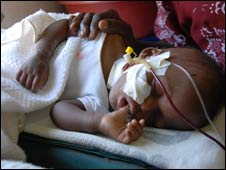 Millions of children, like baby Vanessa, fall victim to pneumonia in the developing world

Vanessa is struggling to breathe. Her lungs are full of fluid, and she is anaemic and malnourished. She is on a drip and receiving a blood transfusion at Mbagathi Hospital in Nairobi. The eight-month-old has bacterial pneumonia.

Her mother and grandmother watch over her in the tiny acute room at the hospital which she shares with four other children - there is barely room to move in the cramped space.

Pneumonia has been called the forgotten killer. It does not get the same attention as HIV/Aids or malaria. Yet it claims the lives of more young children worldwide than both of them combined.

A vaccine against the bacteria responsible for the majority of serious pneumonia is widely used in richer countries. I covered the introduction of the pneumococcal jab into the UK immunisation schedule in 2006. It prevents a good deal of sickness among children in Britain. But the real impact, in terms of saving lives, will be felt in poorer nations.

I'm in the Kenyan capital Nairobi, where I've witnessed the introduction of the pneumococcal vaccine. The jab protects against 10 strains of pneumococcal bacteria which can cause serious pneumonia, meningitis and blood poisoning.

Kenya is one of 19 countries receiving the vaccine from Gavi - the Global Alliance for Vaccines and Immunisation.

The health centre carrying out the immunisation is on the edge of the huge Kibera slum. Disease thrives amid the overcrowded, insanitary and squalid conditions. Many of the children living there suffer malnutrition, which means that they are less able to fight an infection like pneumonia.

It is estimated that a comprehensive roll-out of the pneumonia vaccine among developing countries could prevent more than half a million deaths a year.

In Britain, as in other developed countries, we tend to think that infectious diseases have been conquered by modern medicine. The ancient killers like tuberculosis, measles, pneumonia and diarrhoea have been largely consigned to history, thanks to improved living standards, immunisation and modern health care.

But the deaths of young children and adults from flu this winter demonstrate that viruses and bacteria remain a potent threat. The official death toll from swine flu in Britain runs into the hundreds.

But among poorer nations, deaths from infectious diseases run into the millions. Pneumonia kills around 1.7 million young children each year. Diarrhoeal disease claims another 1.3 million (Black et al, Lancet June 2010). Together they account for about one in three deaths of children under five.

As well as a jab against pneumococcal disease, there is also a vaccine available against rotavirus, the main cause of deaths from diarrhoea.

Gavi and Save the Children estimate the two vaccines could prevent at least one million deaths a year if they were comprehensively rolled out in developing nations. But Gavi says it is facing a funding shortfall for new and existing vaccines, of around £500m a year.

A major meeting on global immunisation is being held in London in June where world leaders will be under pressure to put more money into vaccines. The jabs against pneumonia and diarrhoea are far more costly than other childhood vaccines, but they could have a dramatic impact on mortality.

Other key issues to be addressed are the serious shortage of trained health workers in the developing world and the lack of access to basic healthcare for many - especially around childbirth, when four in 10 of all child deaths occur.

I have reported on the issue of neonatal and maternal mortality in Sierra Leone.

Back in 2000, world leaders set a target of cutting child mortality by two thirds, by 2015 (one of the Millennium Development Goals). There has been substantial progress. Deaths have fallen by a third. But that still means that eight million children a year never make it to their fifth birthday.

Immunisation should not be seen as a quick fix. But without wider use of new and existing vaccines, it is hard to see how the goal of cutting child deaths in the developing world can be achieved.