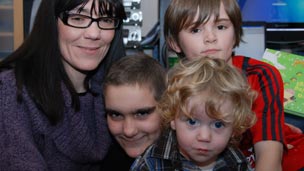 If you want a story of good cheer in the run-up to Christmas, then have a look at that concerning Max and Megan Matthews.

Max is a so-called "saviour sibling" who donated tissue which successfully treated his sister - it is the first time the entire process has been done in Britain. Previous cases - like that involving Charlie Whitaker - followed tissue typing in the United States (see my postscript below).

She was born with a rare inherited condition Fanconi Anaemia. Her body produced no blood cells so she needed transfusions to stay alive (another reason to become a donor - see my previous post). In and out of hospital with infections, it was a tough existence. But Megan is one of the most cheerful and uncomplaining nine year olds I have had the pleasure to meet.

The Matthews live in King's Lynn and Megan gets a lot of her treatment at Addenbrookes Hospital in Cambridge. When she began to exhibit signs of bone marrow failure, the hospital did a worldwide search for a donor, but none could be found.

Megan's parents wanted another baby - they also have an eleven year old son Stuart - but natural conception would have placed them at risk of having another child with Megan's condition. There would also be only a one in four chance of it being a tissue match.

By opting for IVF and Pre-Implantation Genetic Diagnosis they were able to select an embryo that was free of Fanconi Anaemia AND whose cells were able to cure his sister's bone marrow failure.

The IVF and tissue typing was done at Care Fertility in Nottingham, while the transplant took place at the Bristol Royal Hospital for Sick Children. The entire treatment was NHS funded.

The HFEA has granted more than twenty licences for saviour sibling treatment in the UK in recent years, but this is the first time that it has been successful here.

Max's umbilical cord was preserved at birth but not enough tissue was recovered, so he needed an invasive procedure to recover bone marrow stem cells.

Saviour sibling treatment raises ethical issues, especially when it involves a child having an operation to recover cells - clearly the child cannot consent.

Having met Katie Matthews, her children and doctors, it seems to me that great thought went into the decision to proceed with the treatment.

Mrs Matthews is adamant that Max is loved for his own sake, not for how he has helped his sister. There does seem to be a special bond between the two siblings.

She says Christmas has come early for the family and they are looking forward to being together without fearing that Megan will be in hospital needing treatment.

Whatever your views of the ethics of saviour siblings, that is surely something to celebrate amidst all the bad news this Christmas.

PS I have just had a message from Michelle Whitaker saying that Charlie is doing well, six years after his transplant.