Is swine flu a worry? 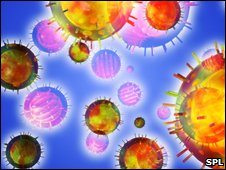 A lot of people are asking is flu getting more serious? It comes after new figures showed 10 people have died from flu-related conditions in the UK in the past week, bringing the toll to 27 since October. Nine of those who died were children and nearly all the deaths have been from H1N1 swine flu.

To put the current death rates in context, 474 people died with H1N1 in the first year of the infection - up to April 2010. Since October this year there have been 27 deaths, so it is, sadly, what might be expected.

For anyone with a loved one who is ill from the complications of flu, this is a worrying time. But there is no evidence that swine flu is getting more virulent, although there is more flu about than this time last year.

Flu viruses kill every winter, predominantly the frail elderly. Things changed with the advent of swine flu which mostly spares the elderly and causes most serious illness in younger people.

H1N1 remains the dominant flu strain this winter. It is worth stressing that for the vast majority it causes an unpleasant but mild illness which resolves after a few days bed rest, with plenty of fluids. Many of those infected have no illness at all.

For a sizeable minority though, flu can be serious. Of the 300 people in intensive care in England with suspected flu, nearly 250 are between the ages of 16-64. Most of those will have swine flu.

That is far more people in intensive care than at any point during the pandemic. At the height of the swine flu outbreak in July 2009 there were 63 people critically ill. Now it is five times that number.

But - if you can bear one more set of figures - compare flu levels now with November 2009. There was not that much flu around then, yet 173 people were in intensive care.

Looking back on my "Fergus on flu" posts, I remember there was an autumn/winter peak of intensive care hospitalisations in 2009 even as flu consultations with GPs were falling. It suggests swine flu can be a more serious illness in winter than in summer, although no virologist I have spoken to has been able to explain this fully.

Now that swine flu is a seasonal strain of flu, we should no longer see much flu outside of autumn and winter.

Crucially, there is no evidence that the H1N1 virus is mutating. Professor Peter Openshaw, director of the centre for respiratory infections at Imperial College London says it is behaving just as it did last year, during the pandemic.

He said: "It is targeting the same groups - pregnant women, asthmatics, people who are a bit overweight or frankly obese - those are the people who it is mostly hitting hard, like last year. They are predominantly between the ages of 20-55 and so it is not the elderly."

That does not mean that the elderly are immune from swine flu. If they do get it, it can be serious. Furthermore, other flu strains are circulating to which they are vulnerable.

Influenza is a vaccine-preventable disease. A disappointing 43% of people under 65 in at-risk groups have been immunised. For those 65 and over its is 68.5%.

The winter weather is also helping to spread flu. Professor Openshaw said these are ideal conditions:

"Flu is a RNA (ribonucleic acid) virus. RNA is very unstable genetic material and easily damaged by ultra-violet light. It is stabilised at low temperatures. In addition people try to escape the cold weather by crowding into small areas and sneezing over each other. Those things tend to make flu spread in the winter. People with respiratory diseases generally suffer a lot more in the winter but that is to a large degree because of the number of viruses circulating."

No-one can predict when the current flu outbreak will peak. In some areas of the UK perhaps half the population have already had swine flu - but that still leaves millions to get infected.

We can all do our bit to reduce infections. Remember the "Catch it, kill it, bin it" campaign. I am not suggesting that people refrain from kissing under the mistletoe. But do try to avoid sneezing on your relatives this Christmas.

The number of people in critical care in England with suspected swine flu continues to rise sharply. As of yesterday it had reached 460.

It's worth giving the breakdown of the age groups affected - they are mostly adults under 64:

There are around 3,500 critical care beds (which includes intensive care and high dependency beds) in England.

"There is a lot of flu around at the moment, some of it serious. So an important message this week is to attend to simple but effective hygiene measures, carrying and using tissues, covering your nose and mouth when you cough and sneeze, immediately disposing of used tissue, and wash your hands regularly."

While most of us are getting into the swing of Christmas, spare a thought for the families affected and for the medical teams caring for them.