Can finger length predict your risk of disease? 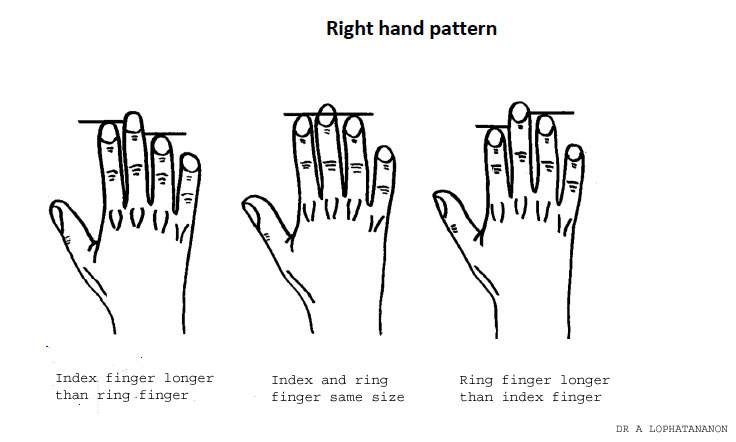 I can guarantee that after reading this, if you are male, then you will examine the length of your fingers. Well, I did anyway. Why? Because a study in the British Journal of Cancer (Rahman_et_al.pdf) suggests that men whose index finger is longer than their ring finger were significantly less likely to develop prostate cancer.

I've done a brief report about it which is on the health pages.

Furthermore, since this appears to be the first study linking relative finger length to prostate cancer risk, it is absolutely crucial that the findings are repeated in other studies. The medical literature is littered with examples where apparently sound research findings are disproved upon later, broader analysis.

But if the findings are replicated, then it would provide an easy predictor of relative cancer risk.

Professor Ros Eeles from the Institute of Cancer Research and the Royal Marsden Hospital is one of the report authors. She explained that the patients involved in the study were asked a whole load of questions about lifestyle and so on, and the team had decided to include one question about relative finger length. There were not expecting such a definite result.

"We were very surprised by the findings", she told me. "But there is a good biological explanation: we know that exposure to male or female hormones in utero determines how long your fingers are. We also know that prostate cancer is driven by testosterone levels later in life. Now we have a biologically plausible explanation for some of the early risk factors."

So can relative finger length predict your risk of any other diseases?

Professor Eeles said a previous study had found a link between exposure to hormones while in the womb and the development of osteoarthritis in men and women, again linked to having an index finger shorter than ring finger.

The research paper contains some comfort for men with comparatively long ring fingers in these terms: "In men, long ring fingers compared with index finger length reflect a more masculine profile, for example, more likely to father a child and a higher sex drive". Really? And what is the reference source for this claim? It is an article in the Daily Mail from 2000 (this reference was in the press version sent to me but is not in the final article attached above).

The newspaper article and this latest paper on prostate cancer risk make repeated mention of research by Professor John Manning at the University of Liverpool. There are suggestions of a link between finger length and heart disease, breast cancer, autism and even musical ability. But the study groups seem to involve very small numbers of people.

Professor Manning has also suggested an association between prenatal exposure to testosterone, the ratio of digit length and male homosexuality in a study of 176 men.
And there's another study about finger length and depression involving 102 people.

The new hand pattern research in the British Journal of Cancer is interesting, not least because it involves a decent number of volunteers, but I sincerely hope it doesn't give men with short, stubby index fingers any sleepless nights chewing on their fingernails.

A few extra details. The trial asked men to look at their right hands, not their left. The researchers told me previous studies suggested the differences in digit ratio are more obvious in the the right hand - no-one has yet been able to give me a convincing reason why this should be. The Hox genes influence both finger length and the development of sex organs.

You are right to point out that this issue of digit ratio has been around a long time, but most previous studies have been small.

Another weakness of this research is that the men involved did not have their fingers measured, but instead looked at a diagram and "self-reported". The authors freely admit this is may lead to error but they felt it was unethical to x-ray them all.

I am grateful to Dr Lophatananon from Warwick Medical School for allowing me to include the diagram that was shown to all the men on the trial.

Finally Professor John Manning is now at Swansea University and drew my attention to a recent study on digit ratio and its possible relation to alcohol and tobacco consumption. The research is based on analysis of a large internet study conducted by the BBC in 2005.