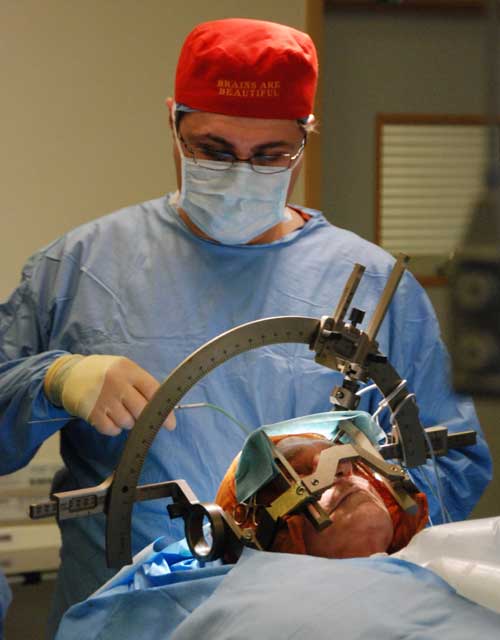 Your headaches have got to be pretty bad to allow someone to drill a hole in your skull and then insert an electrode deep into your brain. That is what Barrie Wilson did. He suffers from cluster headaches, considered to be among the most excruciatingly painful of all medical conditions.

The procedure took place at the National Hospital for Neurology and Neurosurgery at Queen Square in London. Not only did Mr Wilson allow the surgical team to drill into his head, but he was awake throughout the operation. Fortunately, he did not feel any pain. A local anaesthetic numbed the scalp, and the brain has no sensory nerve endings.

Mr Wilson is one of those stoic individuals who refuses to be bowed down by what life throws at him. For years he had suffered daily bouts of horrendous headaches often lasting several hours. Yet he refused to be cowed into submission.

He said: "The last 14 years have been torment. I did not know from day to day, or from hour to hour, when I would get an attack, but you cannot let it beat you otherwise you may as well go into a corner and die. You must be strong-willed."

Dr Manjit Matharu is Mr Wilson's neurologist. "About one in 1,000 people suffer from cluster headaches, and a small proportion of these fail to respond to medication. They are living in agony - these are also known as suicide headaches because some people choose to end their lives rather than face the pain."

Given what he was going through, it is perhaps no surprise that Mr Wilson opted for deep brain stimulation.

I get the opportunity to witness many fascinating - and sometimes gruesome - operations but this one was especially interesting.

The neurosurgeon, Ludvic Zrinzo, wore a red cap bearing the motto: "Brains are Beautiful". Well I guess he should know as he sees them every day. Mr Zrinzo had to insert the probe about 8-9cm into the brain into the posterior hypothalamus - the area which triggers the headaches.

"How accurate do you need to be?" I asked.
"We like to be within 1mm of the target" he replied.

And he was. That is quite something. The electrode is connected to a pacemaker which emits a low electric current. This stimulation aims to block the damaging signals which trigger the cluster headaches.

Throughout the operation Barrie Wilson remained calm and seemingly at ease.

He said: "I felt no pain whatsoever. It was like going to the dentist - you expect pain but then it doesn't hurt. It was a surreal experience."

For Mr Wilson the treatment has been a huge success. Nearly four months after surgery, he has suffered just one headache and feels he has got his life back.

He said: "The only thing that used to ease the pain was pure oxygen. I needed to inhale this as soon as a cluster headache began otherwise it would last for hours. That meant I had to carry an oxygen tank everywhere, and so could do nothing on the spur of the moment. Now my wife and I are hoping to go to New Zealand to see two of our grandchildren. It's great."

Drilling holes in skulls - trepanning - is one of the oldest medical procedures, dating back thousands of years. Of course deep brain stimulation is a lot more sophisticated. The surgical team have MRI scans to guide them. The electrode used is made of titanium alloy. It is all hi-tech stuff. Yet the moment they started to drill into Mr Wilson's skull it didn't feel very hi-tech.

Our knowledge of the brain is more advanced than ever, but according to surgeon Ludvic Zrinzo, there is still a huge amount we don't know: "The brain is the final frontier. If you look at the number of neurons, synapses and connections, these vastly outnumber the stars in our galaxy, and we won't understand all the complexities for many generations to come."

Thanks for your comments on this remarkable story. A quick update on the brain and whether it can feel pain. I asked for further guidance from the neurosurgeon in this case, Ludvic Zrinzo. Since he spends his time doing brain surgery, I guess he should know...