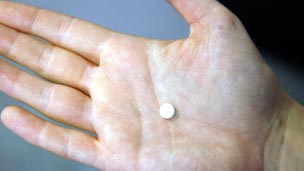 From now on I am going to take a daily low-dose aspirin. I intend to continue doing this for the next 25 years. It's a decision which every middle-aged person in Britain is going to have to consider in the light of research suggesting that aspirin significantly cuts the death rate from many common cancers.

You can read my report on the Lancet study and an abstract of the research paper.

I cannot say for sure that I am doing the right thing. If I get an intestinal bleed in a few months time and am taken to hospital needing a blood transfusion, then it will be easy to argue that I got it wrong.

That sort of adverse drug incident, for which aspirin is a known risk factor, is easy to track. The absence of disease is a more subtle effect, because who can say for sure why some people get cancer and others do not?

It is the new research showing aspirin's apparently protective effect against cancer which has persuaded me. This, I must stress, is a personal decision.

As a 49-year-old in reasonable health with no obvious signs of cardiovascular disease, I've made my own choice. I think it would be dishonest of me to write a long article about this issue and then fail to answer the obvious question - are you going to take aspirin? But I am certainly not trying to encourage anyone else to follow my example.

In the Lancet paper researchers, from Oxford University, Edinburgh, Dundee, London and Japan analysed eight trials, some dating back to the 1970s, which had allocated volunteers to daily aspirin or a dummy pill. The original trials were looking at cardiovascular disease, and the data on cancer had never been fully investigated or published.

By dusting down the data and then following up many of the patients health records, the researchers came up with some remarkable results. Those allocated aspirin for between four and eight years had about a 25% lower risk of dying from cancer. This protective effect continued long after the trials had ended. Indeed, after 20 years, their overall risk dying from cancer was still 20% lower than the placebo group.

The research was led by Professor Peter Rothwell, a clinical neurologist at Oxford University, who two months ago published a study which found that a daily low dose of aspirin cut cases of bowel cancer by a quarter and deaths by more than a third.

The mechanism by which aspirin appears to protect the body against cancer is not clear. But Professor Rothwell said laboratory tests suggested aspirin intervenes at a very early stage to prevent cancers developing.

He said: "When cells divide there is a chance that the DNA in the daughter cells will be faulty. The body has an mechanism whereby either the faulty cells commit suicide (known as apoptosis) or they self-repair. Aspirin appears to enhance the suicide or the repair."

The trouble is, that there has been lots of conflicting research about the risks and benefits of taking aspirin.

We already know that aspirin can protect those at increased risk of heart attack and stroke. But for healthy adults without a history of cardiovascular disease, the benefits are very small and seem cancelled out by the increased risks of bleeding from the stomach and gut.

The last report I did on aspirin, in 2008 was about a study in the British Medical Journal. It looked at 1300 adults in Scotland with diabetes who had no previous symptoms of heart disease. It found that aspirin had no protective cardiovascular effect. The study authors said the research added to evidence that aspirin should not be routinely used for patients at higher of heart attack and stroke unless they already had symptoms of disease.

In the past two years, many GPs have been taking healthy middle-aged patients off aspirin.

The question now is, do the findings on cancer change things? Professor Rothwell said it would be helpful if new guidance was issued in the light of the new findings. There are guidelines from the American Heart Association and the European Society of Cardiology, but these pre-date the cancer research. NICE may also decide to review the role of aspirin. The tablets themselves cost just a few pence.

Professor Rothwell did not go so far as to urge people to take aspirin, but he said the evidence was beginning to look compelling. He said people might want to consider taking low-dose daily aspirin (75 mg) from the ages of 45-70 or 50-75. After the age of about 75 the benefits of aspirin were likely to fall away, whereas the risk of gastric bleeding rose considerably.

Another expert on the effects of aspirin, Professor Peter Elwood, from Cardiff University, said people should make the decision themselves as to whether to take aspirin. "It is up to the man in the street to weigh up the risks of getting cancer, having a heart attack or stroke and setting that against the risk of being rushed to hospital with internal bleeding". But he added the risks of dying from a gastric bleed were "small".

Professor Elwood, an epidemiologist, who did some of the first research into the effects of aspirin on heart attack and stroke, said doctors were good at treating disease, but when it came to preventing ill-health then people had to make their own judgements.

But that is hardly an easy decision for people to make. Very few will have time to read the latest research, let alone weigh it against other studies. At some point the medical profession will need to come to a considered view and issue guidance.

Cancer Research UK suggested that anyone considering taking aspirin every day should talk first to their GP. I'm not sure that family doctors will welcome being inundated with requests for a consultation on this topic, but I suppose patients could mention it if they are at their GP for something else.

Professor Alastair Watson, an expert in translational medicine at the University of East Anglia, also urged people wishing to take aspirin to discuss it with their GP. Nonetheless, he added that the research was "further proof that aspirin is, by a long way, the most amazing drug in the world."

Peter Sever, Professor of Clinical Pharmacology and Therapeutics at Imperial College London, agreed that the research was exciting, but he said it was still not possible to decide whether daily aspirin use was advisable for those without cardiovascular disease.

He said: "We have to remember that aspirin is not a safe drug and it causes harm. And until such time as we know what the numbers are - how many cancers are prevented against how many people suffer significant bleeding then we cannot answer that question."

There will be many who will label aspirin a wonder drug, but the Lancet research raises several issues. For example, we do not know what the effect of very long-term use of aspirin might be.

Professor Rothwell said: "There might be some unexpected hazard from taking aspirin over many years, still yet to be discovered".

We also don't have sufficient evidence for the effects of aspirin on the incidence of breast or ovarian cancer, but this should emerge in the next few years.

For the record, Professors Rothwell and Elwood both take aspirin every day. Elwood has been doing this since the mid-70s, whereas Rothwell, who is 46, has been taking aspirin for two years.

Professor Elwood said taking aspirin at night, with calcium, appeared to enhance its effects. Since milk is a good source of calcium and can reduce stomach irritation, he suggested some new trials should test the effects of taking aspirin with a glass of milk.

Of course, it is perfectly possible that some new study will change things yet again. But for now, aspirin and a glass of milk will be part of my evening routine.