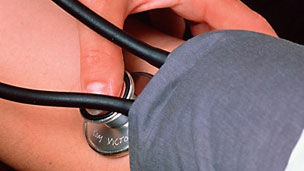 I wonder what the great William Harvey, physician to Barts Hospital in the 17th Century, would have made of new research there into blood pressure.

High blood pressure is often called the silent killer because it greatly increases the risk of heart disease and stroke and yet many of us don't realise we have it.

A small trial of a new technique to control blood pressure has shown promising results reported in the Lancet medical journal. Barts and the London NHS Trust was one of about two dozen centres around the world which took part.

The procedure takes about an hour and involves inserting a tube into the renal artery and zapping the nerves with radiofrequency energy. This interrupts messages from the kidney to the brain which can escalate blood pressure. In a trial of 100 patients, most of those who had the procedure had substantially lower blood pressure after six months.

The average blood pressure for the treatment group was 178/97 mmHg. Six months after treatment, it had dropped to 146/86 mmHg, a substantial fall.

What the investigators cannot explain is why 1 in 10 patients who underwent the procedure did not show any reduction in blood pressure.

Far bigger, longer trials will be needed before doctors will know whether the technique will give them a new weapon in treating hypertension.

Dr Mel Lobo, a hypertension expert at Barts believes the procedure may have the potential to save thousands of lives a year among patients who don't respond well to a range of medicines:

"We very rarely expect to see big drops in blood pressure - more than 10mm of mercury - with further changes in medication. So to be able to drop somebody's blood pressure by this much as a result of a relatively simple quick procedure is of ground-breaking importance".

After I'd finished interviewing Dr Lobo, I popped in to the museum at Barts. It's open Tuesday-Friday from 10am-4pm and is definitely worth a visit if you are interested in the history of medicine.

There's a bust of William Harvey, who was physician to Barts from 1609-1643 and who was the first person to correctly describe the circulation of the blood.

Now I'm not for one minute putting this new treatment on the same level as Harvey's breakthrough, but there's a nice sense of continuity about research into blood continuing uninterrupted for four centuries. Harvey, surely, would be fascinated.