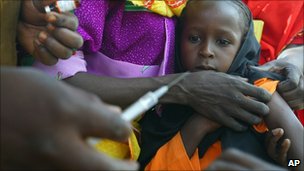 Ten years ago today, at the largest gathering of world leaders in history, an historic document was signed.

The Millennium Declaration was ambitious, aiming to "free all men, women, and children from the abject and dehumanizing conditions of extreme poverty." From this emerged a series of eight Millennium Development Goals (MDGs) which set targets to be achieved by 2015.

The MDGs represented a defining moment for global cooperation. Forged amidst the enthusiasm and optimism of a new millennium, they were the first ever set of shared development goals at international level. They confront many fundamental issues: the battle against extreme poverty and hunger, tackling preventable disease, achieving gender equality and sustainable development. Progress towards the MDGs has been mixed, but many of the targets look like being missed. There is huge regional variation, with sub-Saharan Africa performing badly on nearly every measure.

These are the 8 goals:

World leaders will meet again in New York later this month for a summit on the Millennium Development Goals. A decade on, the global financial crisis means these are difficult and demanding times for aid agencies and budgets. But the UN says the summit is the last chance - with five years to go - to agree a concrete action plan to accelerate progress.

With two weeks to go before the summit, several aid charities are setting out their stalls. Save the Children produced a report, "A Fair Chance of Life", which said an extra four million of the world's poorest children have died over the past 10 years because governments are "turning a blind eye" to those most in need. The number of deaths of young children has fallen, but the MDG of cutting child mortality by two thirds looks set to fail.

"Nearly nine million children under the age of five die every year - many of them from easily preventable or treatable illnesses - just because they can't get to a doctor or because their parents can't afford food that is nutritious enough to keep them alive."

The United Nations children's agency unicef has also published "Progress for Children", which sets out progress towards the MDGs. It makes clear that although there have been some "impressive gains" in child survival in some countries in sub-Saharan Africa, there was a widening gap in mortality rates between this region and elsewhere. For example:

"In the global push to achieve the MDGs, we are leaving behind millions of the world's most disadvantaged, vulnerable and marginalized children: the children who are facing the longest odds."

Another charity, WaterAid launches a report today which argues that the world has neglected sanitation. It says the hope embodied in the MDGs is "mired in excrement". Wateraid says diarrhoeal diseases caused by poor sanitation and unsafe water kill around 1.4 million children a year, more than AIDS, malaria and measles combined. The MDG target was to halve the proportion of people living without basic sanitation. WaterAid says 2.6 billion people live without access to safe, hygienic toilets, and at the current rate of progress the 2015 target will not be met until 2049, and in sub-Saharan Africa, not until the 23rd century.

The Deputy Prime Minister Nick Clegg will be at the UN meeting, "pushing hard" according to ministerial colleagues, for greater collective action on the MDGs. There will be much lobbying of Mr Clegg - look at the Spinometer on the unicef website - in advance of the UN summit. Aid agencies will want to ensure that the coalition government sticks to its pledge to protect the overseas aid budget.

Some detail was set out in the programme for government in May (opens pdf) which said:

"We will honour our commitment to spend 0.7% of GNI on overseas aid from 2013, and to enshrine this commitment in law. We will encourage other countries to fulfil their aid commitments. We will support actions to achieve the Millennium Development Goals."

GNI is Gross National Income. For more detail on the background to this pledge, a detailed Commons guide was last update in April (opens pdf).

Helping the world's poorest and most disadvantaged communities is clearly something that every developed nation should sign up to. But once the full scope of domestic spending cuts have been outlined, there maybe considerable debate about just how much the UK spends on overseas aid.