'Snowballing' of cases in intensive care

It is curious that although the overall number of H1N1 swine flu cases has been fairly static over the past week, intensive care units continue to come under increasing pressure. The Chief Medical Officer for England, Sir Liam Donaldson, gave his weekly update to journalists via video link from Washington, where he's attending health meetings.

Sir Liam said: "there has been a snowballing of cases in intensive care units in recent weeks which is giving us real concern". He stressed that there was no evidence that the H1N1 virus was mutating. "It is unexplained," he said, adding that he'd met the chief medical officer for New Zealand in recent days who had pointed out that his country had seen a similar phenomenon over their winter. Half-way through their recent flu season there had been a fall in the severity of most cases in the community but an increase in severity in a minority of cases with complications.

My thanks to the Department of Health, as always, for providing this data for the blog. Never before has a pandemic been so closely monitored, in real time. This chart shows that as of 0800 on 4 November there were 848 people of all ages in hospital in England with suspected swine flu. Of these, 172 were in critical care. Last week there were 751 in hospital of whom 157 were in intensive care.

That seems surprising when you look at what's happening to swine flu from weekly consultations with GPs. 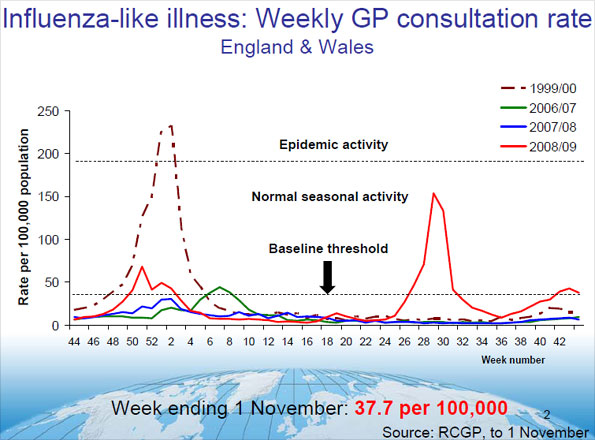 This is a key graph for understanding what the H1N1 virus is doing. As always, look at the solid red line. You'll see that it actually dipped a bit in the week up to 1 November. Health officials think this is probably the result of children being on half-term, rather than the start of a downward trend.

The Health Protection Agency estimates there was a slight increase in cases of swine flu in England this week, to 84,000 cases, up from 78,000 the week before. Remember though there is a huge margin for error because very few people are tested for the virus and we still don't know the proportion of those who get infected yet have such a mild illness that they either don't know they've had swine flu, or they cope without bothering the health service. 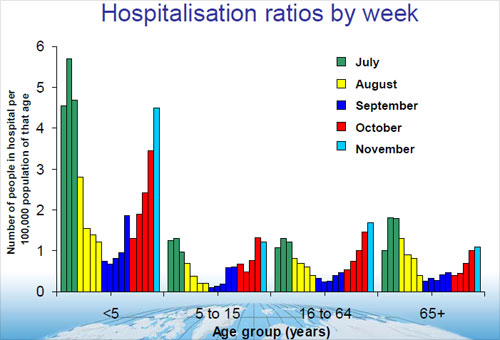 This is a useful chart because it shows, by age group, the ratio of people in the community who have been hospitalised. Children under five represent the biggest group needing hospital treatment. If you look at the five to 15 age range, this is the only group where there was a fall in the ratio hospitalised over the past week (probably due to half-term).

I promised to update you on how the distribution of swine flu is going. Health officials confirmed that 6.4 million doses of the GSK vaccine Pandemrix were now in the UK and of these, 4.4 million had been distributed. Sir Liam said that by the end of next week virtually all GPs would have received their first delivery of swine flu vaccine. The warehousing and distribution of the vaccine is being handled by Movianto, which on its website says that it delivers 40% of all domestic pharmaceutical products in the UK.

Movianto also has 1.43 million doses of Celvapan, the swine flu vaccine made by Baxter. This is being reserved for the tiny proportion of people who have a severe egg allergy as (unlike Pandemrix) it is not grown in eggs. The potential downside of Celvapan is that two doses are required to confer immunity compared to one dose of Pandemrix, which explains why the GSK vaccine is the one primarily recommended by the Department of Health.

A reminder that vaccination against the H1N1 pandemic strain is being limited, initially, to people considered most at risk of complications of flu (such as those with asthma, heart disease or immune disorders).

In addition, front-line health workers are being immunised. There are no figures yet on uptake of the jab among NHS staff, but Ian Dalton, the NHS flu resilience director, said that anecdotal evidence was looking good: "It's very positive," he said. "There's a sense that staff recognise it will protect them, their families and patients."

As I've said before, it's just a question of time before the swine flu immunisation programme is extended beyond at-risk groups, with healthy children being the next priority.

The Conservative health spokesman Andrew Lansley has formally called on the government to extend vaccination to all school children and college students. Mr Lansley says he's been pressing for this "behind the scenes" for weeks. Sir Liam says it's not a question of whether but when the programme is extended, but they are looking at the best way of doing it. He said an announcement would be made "within a couple of weeks".

Swine flu across the UK

My apologies to those who live outside England. This summary must appear rather England-centric. It's an inescapable fact that I can't get to the swine flu briefings outside London, but I do my best to reflect what's happening UK-wide. It would be great if the four health departments could get together and publish UK data as well as that representing their individual statistics.

To summarise, there have been slight falls in the number of suspected swine flu cases in Scotland and Wales, with a big decrease in Northern Ireland.

In Scotland 17,487 people are thought to have contracted swine flu over the last week, compared with 19,200 cases reported in the previous week.

In Northern Ireland, 215 laboratory-confirmed new cases have been reported in the last week, compared with 142 in the previous week - the department there does not seem to publish an estimated total of those infected, making comparisons difficult. Nonetheless, it does report GP consultations for flu and flu-like illness, which have decreased from the very high level of 280 per 100,000 to 222 in week 44 (21% decrease). Contrast that with the rate of 37.7 in England.

In Wales, 1,971 people contacted their GP in the last week with flu-like symptoms, compared with 2,626 the week before.

Justin McCracken, chief executive of the Health Protection Agency told journalists that in England, around 50% of patients who were being swabbed for suspected swine flu actually tested positive for the H1N1 virus. In Scotland and Wales, the rate is around 40%, while in Northern Ireland it is 80%.

The overall number of deaths linked to swine flu now stands at 154 for the United Kingdom - 105 in England, 31 in Scotland, eight in Wales and 10 in Northern Ireland. The average age of those who've died is 44. Four out of five of those who've died have had some underlying health problem.