To spend or not to spend?

If you were a benevolent, omnipotent deity, governing the UK economy at the moment, what would you do?

Assuming that is, you can’t cheat, and help us all by creating a new set of oil fields or offering us free car insurance.

Would you drive consumers into the shops to spend more to boost the economy?

Consumers are saving well below their long run average. We probably need a consumer slowdown of some kind, and we need to wean our economy off the growth that depends on consumers constantly increasing their debt to income ratios.

But while a slowdown is desirable, an abrupt or dislocating halt to all spending is not.

It goes back to John Maynard Keynes and the so-called “paradox of thrift”. Saving is good, but if we all try to save too much simultaneously, we all end up in an economic quagmire as spending dries up, incomes contract and the economy shrinks. 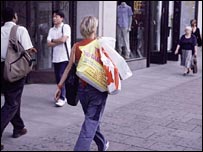 So the question that arises out of today’s retail sales figures is whether the slowdown is now going too far for our own good? Today’s figures were far worse for the shops than expected; worse indeed than the survey from the British Retail Consortium earlier in the month implied.

It is true that in the last three months spending rose by 0.4% and so there are no grounds for panic. (In fact, that 0.4 per quarter amounts to about 1.5% a year, which looks about ideal if you want a gentle slowdown).

The problem is that the decline in the three monthly growth rate has been very rapid, and it could turn negative or seriously negative fairly quickly.

And we need to be aware of the discounting that occurred. For example, buried deep in the data that we got today is the astonishing fact that in household goods stores, prices in December 2007 were more than 8% below their level in 2006. There hasn’t been any deflation like that in recent memory.

So if I were a deity looking after the economy, I would not be programming British shoppers to do their patriotic duty and spend money but I would be ensuring they spent something.

If the power of the consumer to rescue the economy is limited, what else could the almighty do for us? What other options are there for protecting the economy against the risk of a deep slowdown?

He or she could encourage the chancellor to loosen fiscal policy i.e. spend and borrow more and possibly cut taxes? That’s what the Americans are talking about today.

That is an idea for an economic rescue. It’s pure Keynes in fact, another of whose massive contributions to economics was to point out the power of fiscal policy when other policy tools are failing.

But in Britain today, you would probably say that the slowdown is not yet bad enough to merit any special action plan. And there is the small matter of the Chancellor’s Golden Rule. The rule might be breached if the government deliberately went out to spend and borrow more.

In fact, the British government is not that dissimilar to British consumers in having overstretched itself in recent years. With a deficit of about 3% of GDP this year (a year in which the economy has grown strongly despite all the financial market problems) the room to loosen fiscal policy is not really there.

So what else is there that could be done to help the economy? Probably the answer in the UK is for our deity to push down sterling.

That should have the effect of promoting exports, inhibiting imports, and thus reducing the country’s manifestly unsustainable trade deficit. At the same time, it would cushion the country from an excessive slowdown, by allowing households to save more while foreigners take up the slack and buy our goods instead of us.

If a weaker sterling is what the almighty would prescribe for the UK, it is of course what the invisible hand is already delivering to us too. The pound has had a strong year against the US dollar, but don’t be fooled by that. Against the euro, it has tumbled, and carries on tumbling.

And that means what an economically-literate deity would be striving for in the UK this year is re-balancing away from consumer spending, towards trade and exports, with the minimum possible slowdown in the process.

Unfortunately, the process of a significant economic re-balancing is never smooth.

And this one is no exception. Exports will struggle to offset the decline in consumer spending; exports may not take off at all if our customers in the rest of the world face financial troubles of their own. And we still have the problem that there may be a some inflation embedded into the economy – in which case we won’t be able to let sterling fall too far for fear that it will raise import prices in doing so.

So I’m afraid that this will be a difficult year even if it goes well. There’s little point in hoping that government or consumer spending can change that.

Even if we put ourselves in the lap of the gods, we won’t avoid some kind of slowdown in 2008.

I've now moved on to a new job, presenting Radio 4's Today programme. Evanomics will continue to exist in some form, as yet undecided.