Campaigning to the last

I just got the latest press release from Congresswoman Deborah Pryce’s office telling me where the Ohio Republican’s going to be today, still campaigning right up to the very last minute.

That’s been one of the features of this election. Incumbents who’ve barely had to raise a smile let alone millions in campaign funds in years have been out doing things the old fashioned way, shaking hands, kissing babies, searching for those last elusive votes that could make all the difference. 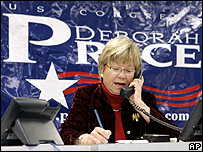 Deborah Pryce (number four in the Republican leadership in the House of Representatives) is more used to making guest appearances at events held by less secure members. But this year, her own race is so tight that she’s been working her district hard. She even embarked on a bus tour late last week. I spent the best part of a day trying to track it down. She wasn’t at the bowling alley or the hot dog restaurant on the schedule her office sent out. The owners in both cases were a little bemused, they’d heard she might be dropping by, but it was at Tommy’s Pizza that things descended into farce.

Picture a tiny pizza restaurant, a BBC reporter and producer and twelve large German MPs. They too were trying to see the Congresswoman campaign. I’m not sure they ever did. I caught a glimpse of her bus go sailing past the window so jumped in the car in hot pursuit, her press secretary on the cell phone shouting instructions “turn left, turn right” until we arrived at the rally she was going to address.

Finally we got the interview and the sound we wanted. I still wonder what happened to the Germans.

great blog! Your blogging gives a far better sense of what is going on as compared with charts and tables and powerpoint presentations.

This is the BBC's US mid-term elections blog, with analysis and comment from all the BBC journalists covering the polls.

Click here to meet our reporters, or here to find out how you can join in.

More from each reporter

The above are three recent stories about the US mid-term elections from the BBC News website.
Click here for more.