Is there a more chilling spectacle than a country sliding, fast and foolishly, into civil war?

Ivory Coast is at least three-quarters of the way there now, and the optimists are running out of straws at which to clutch. 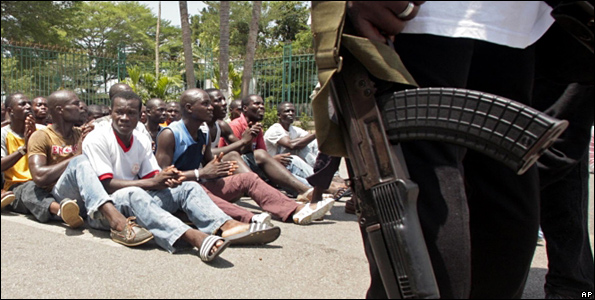 These supporters of Laurent Gbagbo are undergoing military training

It's still not beyond the realm of possibility that this might play out peacefully," says a western diplomat in Abidjan. "But that's becoming less and less likely."

"It will be worse than Rwanda," says a contact of mine, who is close to Laurent Gbagbo, the man trying to cling on to the presidency. The comment hangs pungently in the air - half-way between a warning and a threat.

We can quibble over the details of the impending war. Military leaders allied to internationally recognised President Alassane Ouattara talk - unrealistically to my mind - of something like a "blitzkrieg." Others fear something grimly close to genocide. But the drumbeat of war, of one sort or another, is ominously loud.

Can outside pressure still halt the inevitable? There is hopeful talk of widening divisions within Gbagbo's camp, of defections and waverings - a palace coup, perhaps - as international economic sanctions bite. But Ivory Coast's key neighbours are caught up in their own electoral battles, and while the region hasn't ruled out military intervention, it's doing a lousy job of trying to sound threatening.

There are some signs that, after weeks spent focusing on Libya, the UN and the African Union are once again turning their attention to Ivory Coast's crisis. About time too. For many on this continent, the contrast between the international responses to the two countries is stark and telling.