A collector's treasure in the heart of Johannesburg 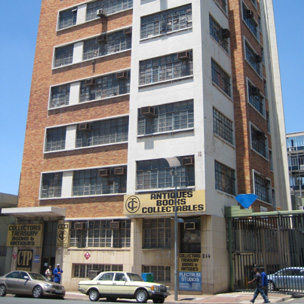 "I know where all of them are," says Geoff Klass, peering down a musty corridor lined with teetering towers of books. "Well, where they were... unless someone has moved them..."

We're standing in a neglected-looking building, surrounded by warehouses, on a drab street in the heart of central Johannesburg.

From the outside, you'd struggle to guess that this is South Africa's and Africa's - possibly the whole southern hemisphere's - biggest rare and used bookshop.

Only a rooftop billboard, eight storeys up, advertises this as "Collectors Treasury."

So how many books then? "Two million," says Geoff, 62 - a figure that includes maps, documents and a dusty jumble of other "items."

He first opened shop above a garage in 1974, with his brother Jonathan and his wife Jenny. They moved - what a job that must have been - to the current location in 1991, at a time when the city centre was being abandoned by most big businesses because of rising fears about crime.

Geoff points off towards a cluttered corner. "Take the stairs down there - explore..."

You could get lost in here for days. Eight jumbled floors of reading. I drift through a maze of tall, packed shelves - each buttressed from the floor by more stacks of books, some breaking like waves, and scattering across the carpets.

There is, or was, a system in place - but finding it requires an archaeologist's persistence. Aeschylus peeps out from behind a pile of trashy novels. A thick wedge of 1970s vinyl records leads the way to an impressive collection of hardbacks devoted to Caucasian carpet weaving. On a nearby shelf, Just William stares out at me. There's a whole room full of first editions.

It is all very... British. "But that's changing, slowly," says Geoff. Five years ago he reckons 2% of his clientele was black. Today, it's about 10%. A sharp rise. He laments the lack of any similar increase in black authors. "There are no more being published now than during the second half of apartheid," he says - at least when it comes to fiction.

Outside, the city is changing faster. Geoff scoffs at the "crime capital" reputation that has stuck to Johannesburg. "I've had no real problems. It's mostly a media creation anyway," he says, pointedly, lamenting the way "the white population has been weaned away from the city centre."

"But things are changing. We've got Arts on Main," - a chic series of refurbished warehouses-turned-galleries where I've just been for an excellent lunch - "there's a boutique hotel. More accommodation is being built in the city centre. The inevitable process of regeneration - as in all big cities - is underway," he says confidently. Buying the building may turn out to have been an extremely sound investment.

I share his optimism. It's going to be a long, uneven haul, but there does seem something almost inevitable - our almost instinct, almost true, as a famous librarian once wrote - about the steady transformation of the downtown area. You can feel the momentum and the logic of it all. Come and browse for yourself.