What has Hawking done for science?

Can't see the film? Click here to watch the interview with Professor Hawking.

You get to meet all sorts of interesting people working on the One Show but it is still pretty rare to meet a bona fide genius. Professor Stephen Hawking is most definitely that. He is one of the country's pre-eminent theoretical physicists and the author one of the best-selling science books ever - A Brief History of Time. 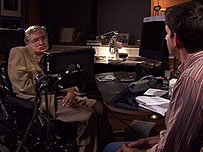 That is extraordinary enough, but Stephen Hawking has achieved all this despite being profoundly disabled by motor neurone disease. He now only has very limited movement of his face. He communicates using a sensor on his cheek which allows him to select letters on a computer. But that doesn't stop his personality and sense of humour coming across.

As we set up the cameras for the interview I mentioned my mother's name and that she had studied Physics at Cambridge around the time that he was there. His cheek began to twitch. It was clear that he had something to say to me. But it takes Stephen quite a long time to express himself as he constructs words letter by letter.

As I waited to hear what he had to say I couldn't help but speculate. My mother had not mentioned knowing him. Was there a reason for that, I wondered....

Suddenly his computer voice box spoke: "I was not a good student. I did not spend much time at college, I was too busy enjoying myself."

You can see our interview with the great man here. But I do have something of a confession to make. I didn't understand most of his book. Did you?

What has Hawking done for science? How important is he? Have you read and understood A Brief History of Time? Click here to add your comment.

In order to see this content you need to have both Javascript enabled and Flash installed. Visit BBC Webwisefor full instructions

This is BBC The One Show's One Passions blog. Get creative and share your passions, hobbies and interests with the programme, and the nation. Get more information and watch exclusive videos.

You can stay up to date with The One Show - One Passions Blog via these feeds.

The One Show - One Passions Blog Feed(RSS)

The One Show - One Passions Blog Feed(ATOM)

The One Show Blogs