Escape from the Nazis: Kindertransport 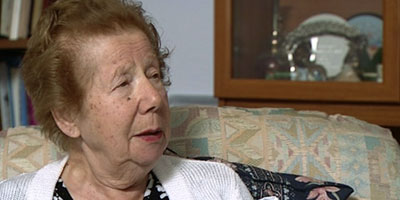 On December 1st 2008 it will be 70 years since the start of Kindertransport - a little known rescue mission.

In 1938 before the outbreak of World War II, there were more than nine million Jewish people living in Europe. After the war, nearly two thirds of them were gone, murdered as part of the Nazi's Final Solution.

Just months before war broke out, the British Prime Minister granted temporary admission for Jewish children and teenagers. On December 1st 1938 the first Kindertransport train left Germany. In total the scheme saw the evacuation of over 10,000 predominately Jewish children from Nazi occupied states to countries such as the UK. Many of these children never saw their relatives and extended families again.

The One Show's Lucy Worsley met with Bertha Leverton, who along with her younger brother Theo was one of the teenagers that made the journey to the UK. Bertha was 15 at the time and living in Munich. She remembers her parents making the traumatic decision to send two of their three children away on the Kindertransport. She told Lucy:

"To see so many people breaking down at the platforms. Children crying and being pushed into the train compartments. And every parent promised their child something that of course the majority couldn't keep - 'don't worry darling we'll see you soon
'we'll be coming - we'll all follow'"

On arrival in Britain, Bertha and her brother were housed in a holiday camp near Ipswich. After her sixteenth birthday she was employed as a maid.

In the summer of 1939, with war looming, her little sister Inge joined her. Bertha:

"It was wonderful, absolutely wonderful. And I tell you the best food I've ever eaten in my life - you know what that was? Three day old sandwiches - egg sandwiches that my mother made and she being a well brought up little girl didn't throw away what she didn't want and to me they tasted heavenly because my mother had made them."

Approximately 80% of Kindertransport families were never reunited. Many of their stories have been forgotten.

But Bertha was one of the lucky ones. Back in Germany, Bertha's mother and father had made arrangements to escape from Nazi occupied Germany. In a dangerous journey they slowly made their way across Europe and in 1944, five years since they were last together, Bertha's family were finally reunited in England.

Bertha recalls:
"There's so many good moments in a person's life but that really topped it all off after five long years. It's the single greatest moment of my life..."

For more information on this subject go to:

Were you or anybody you know involved with the Kindertransport mission? Were you or one of your relatives one of the children? If you have any memories or stories from this time, we'd love to hear from you.

This is BBC The One Show's One Passions blog. Get creative and share your passions, hobbies and interests with the programme, and the nation. Get more information and watch exclusive videos.

You can stay up to date with The One Show - One Passions Blog via these feeds.

The One Show - One Passions Blog Feed(RSS)

The One Show - One Passions Blog Feed(ATOM)

The One Show Blogs