This page has been archived and is no longer updated. Find out more about page archiving.
weekdays at 7pm on BBC One

Need to shed some light on a tricky issue? Get tips from experts and while you’re there add your own expertise to the subjects we love to tackle on the One Show.

In order to see this content you need to have both Javascript enabled and Flashinstalled. Visit BBC Webwisefor full instructions

After months of negotiation The One Show was finally granted access to a serving spy from the Secret Intelligence Service. It's the first time television cameras have been able to film a serving MI6 officer - and for security reasons The One Show had to disguise his voice.

The interview comes at a time when the SIS is on the look out for people from less traditional backgrounds to become the next generation of Her Majesty's spies.

, Lucy Siegle and Hardeep Singh Kohli were grilled by the serving spy.

I was very curious to meet "John", the first serving intelligence officer the secret service has ever allowed to speak in front of the television cameras.  Of course I may, in my years as a journalist, have met secret agents before, but if I have I didn't know it.  John, however, was completely open: "I'm a spy," he told me.  "I am an operational officer". 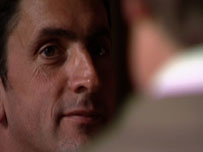 John is a tall, good looking white man in - I would guess - his early fifties.  We met in the sort of place you would expect spies to be - a state rooms at the foreign office.

He's well spoken and relaxed with an open, candid manner. He's been an undercover agent for over 20 years and has worked abroad in a number of different countries.  His wife knows what he does but his two teenage sons don't.  He doesn't drive an Aston Martin or carry a gun but apart from that appeared to be pretty much a textbook secret service agent.

SIS - that's MI6 to you - allowed us to interview John to publicise their new open recruitment programme.  Now you don't need to wait until you get a tap on the shoulder - you can apply right now online.

John is the head of recruitment for Secret Intelligence Service and had agreed to spend a morning putting me and my One Show colleagues Hardeep and Lucy through the paces of the MI6 recruitment process.

As part of the deal we were allowed to quiz John on recruitment - but also on what spies like him actually get up to.  So what was the most revealing thing I learnt?  Well, to be honest it was what spying isn't. 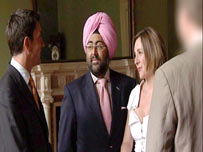 To my disappointment I learnt that spies don't tend to get their information by seducing the president's daughter or breaking into the safe in the Foreign Ministry.  Successful espionage is about finding people who have access to the information you want and then persuading them to give it to you.

Which is why the key quality SIS want in new recruits is empathy:  "what makes a really good spy stand out from his peers", Agent John told me, "is the ability to relate to people, the ability to understand other people."

I'd been told that John was not his real name and that he'd be in disguise.  So right form the off I was looking for flaws in his cover.  The high cheekbones had to be real but I reckoned the glasses were probably fake.

His tousled brown hair with a touch of grey could have been a wig but if it was, it was a good one.  Which leaves the moustache.  It's the obvious one isn't it?  So I checked out the trim little brush that decorated his upper lip pretty carefully, moving round to check it out in different light.

In the afternoon we sat John under our bright television lights and it was my turn to ask the questions.  This was no interrogation but I did want to get under his skin, to find out what spying is really about.

That's when his cover started to break - or perhaps more accurately - wilt.  I noticed he began to touch his upper lip a bit nervously.  Then I noticed that the edge of his trim little salt and pepper 'tash had begun to peel away.

In a break in filming I felt obliged to draw this fact to his attention.  "John," I said, "your moustache seems to be coming off." He was admirably cool about it.  "I was worried that might happen," he said.  He'd been wearing the thing for something like seven hours without a break and now was sitting under hot lights.

"Perhaps you should get Q to make up some better glue," I joked.  John laughed gamely and peeled the moustache off completely.

The rest of the interview was conducted bare-faced, you can watch it here.

Would you consider joining the Secret Intelligence Service? Would you like to be a spy? Have your say below.

This is The One Show's blog about consumer issues and current affairs.

Please leave your first name and location on your blog comment, if you'd like it to be mentioned on The One Show programme.

THE ONE SHOW BLOGS