The Premier League's best - by the numbers

You will probably know that Arsenal's Robin van Persie won the Premier League's Golden Boot for his 30 goals this season, and may have found out that Manchester City's David Silva made the most assists over the last 10 months, with 15 of his passes leading to goals.

But who else tops the rankings in this most thrilling of seasons?

We asked Opta to provide us with the top 10 performers across 10 different categories from defence through to attack. While there are some clear anomalies - Blackburn's Mauro Formica being the third most successful tackler, for example - the statistics do offer some interesting insights, with the value of Swansea's players particularly revealing.

So, although you might have decided who the best players of the season are, here we present an alternative view of the season's top goal takers, goal makers and goal stoppers.

Manchester United striker Dimitar Berbatov has only made five Premier League starts this season, but he is the division's sharpest shooter, based on minutes per goal.

Of course, a lack of action favours him and others when the impact is measured in this manner. Even Newcastle's Papiss Cisse, who joined Alan Pardew's side in January, may have struggled to keep up his incredible goal scoring form over the whole season.

When it comes to shooting accuracy, or shots on target, Aston Villa's Darren Bent is top of the pile. Injury may prevent him from taking part at the European Championship, but other likely England starters Ashley Young and Frank Lampard have underlined their value this season. 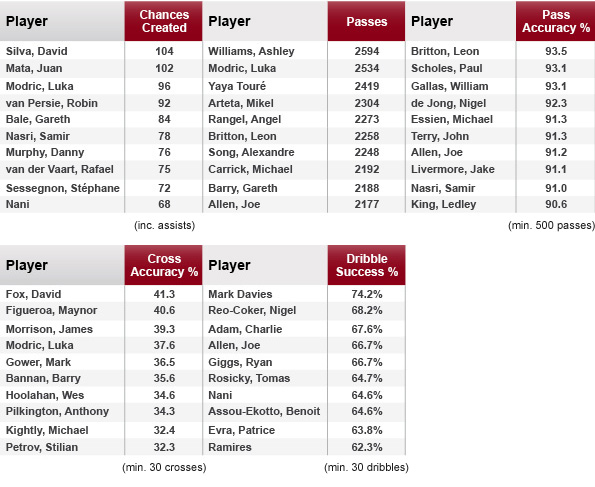 Only one Englishman features in the Premier League's top 10 chance makers, and Fulham's Danny Murphy is unlikely to be selected in Roy Hodgson's Euro 2012 squad.

But Manchester United's Michael Carrick and Gareth Barry both feature in the season's most frequent passers of the ball, while in this category, four of the top 10 are Swansea players.

Only Swansea midfielder Leon Britton pips Paul Scholes as the most accurate passer of the season, while his team-mates Mark Gower and Joe Allen are prominent when it comes to crossing and dribbling success. If you hadn't heard of Norwich midfielder David Fox, you have now.

The resolute displays from Brendan Rodgers' team are again highlighting in defence. Not only is Williams the most frequent passer in the top flight, he has made the most blocks.

While that category may favour those teams who have to defend more often, Manchester City centre-back Joleon Lescott proves that his tackling success has been a cornerstone for the league's meanest defence.

He and fellow centre-back Vincent Kompany have played their part in making goalkeeper Joe Hart's job that little bit easier.