Who should go to the Euros for England?

New England boss Roy Hodgson has been successfully parachuted into his role but the real work starts now.

Without a single international to see his players in action under his stewardship, the current West Brom manager must choose who to take to Euro 2012 and will announce his choices next Wednesday.

In goal, the selection of Joe Hart would appear obvious but across the whole team there are several decisions to be made, not least who will start in the absence of Wayne Rooney for the games against France and Sweden.

Here former England internationals including Gary Lineker, Chris Waddle and Danny Mills give their thoughts on who will make the trip to Poland and Ukraine.

In the build-up to the 2010 World Cup, there was a worry over who England's number one was. This time, it is more a question of whether there is a capable deputy. Joe Hart has been a model of consistency for Manchester City, keeping the most clean sheets in the Premier League and has firmly established himself between the posts for his country.

But beyond the 25-year-old, there is a dearth of keepers performing well in the Premier League. West Brom's Ben Foster, who ended his international career prematurely, could be tempted out of retirement by his former boss Hodgson.

Elsewhere there is West Ham's Robert Green, who could be back in the top flight next season, and former West Brom stopper Scott Carson, who finished mid-table with Turkish club Bursaspor.

Former Scotland centre-back and Match of the Day pundit Alan Hansen says: "Along with Wayne Rooney, Joe Hart is probably the only other player in the squad at his peak." The question remains who the two deputies will be, but Foster could provide welcome competition. 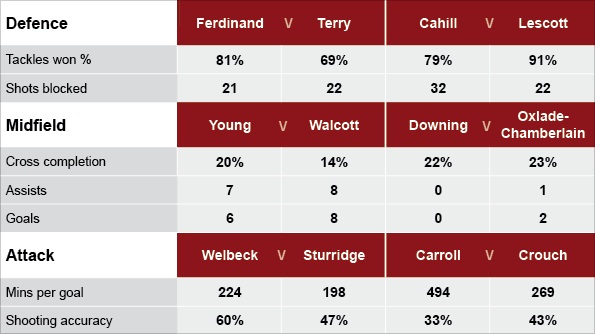 The big question in the heart of England's defence is whether John Terry and Rio Ferdinand can play together given Terry's pending court case concerning alleged racial abuse of Ferdinand's brother, Anton.

Aside from that, is either of the pair actually the best option for England? Gary Cahill has impressed for Chelsea, although has a hamstring problem, while Manchester City's Joleon Lescott has the highest percentage of tackles won in the Premier League among those four candidates. Lescott also impressed when he played alongside Phil Jagielka when England beat Spain 1-0 at Wembley last November.

"You've got issues in the defence," says former England right-back Danny Mills. "John Terry has been great at times. He's obviously got a lot on his plate at the moment but has come back and has shown a bit of form. Take the Barcelona sending off out of the equation and he has been playing pretty well.

"Ferdinand has been in and out through injury but, for me, Joleon Lescott is not an international defender. I don't know whether he's been playing that well."

But at right-back there is an interesting three-way tussle between Liverpool's Glen Johnson, Tottenham's Kyle Walker and Manchester City's Micah Richards.

Mills adds: "At right-back, there are some good candidates but who has been playing well enough to say 'that's my spot'? Glen Johnson has his faults, Micah Richards has not been playing enough football, and while Kyle Walker is fantastic going forward, I'm not sure he's ready to defend in those sort of pressure situations in a tournament."

What combination Hodgson chooses in midfield will be intriguing, but it is fairly safe to say that as far as central positions go, Steven Gerrard, Frank Lampard, Scott Parker and Gareth Barry will all make the trip to Poland and Ukraine.

In wider positions, former England boss Fabio Capello preferred Arsenal's Theo Walcott and Manchester United's Ashley Young, while Chelsea's Daniel Sturridge impressed in the recent defeat by the Netherlands at Wembley, and there have also been calls for Arsenal's Alex Oxlade-Chamberlain to be picked.

"Sturridge has something about him," says former England striker Gary Lineker. "But the fact is that Arsene Wenger very rarely picks Oxlade-Chamberlain, so why would England?"

Former England winger Chris Waddle disagrees. "Oxlade-Chamberlain should go. When he has played in midfield or on the wing, he has looked threatening and his crossing is good."

He may not have played the same number of Premier League games as his contemporaries but Oxlade-Chamberlain's cross completion is superior, and his dribble completion easily beats Walcott, Young, Stewart Downing and James Milner.

Calls for Paul Scholes to return to the fray seem far-fetched after he made less of an impact against some of the Premier League's better teams recently. 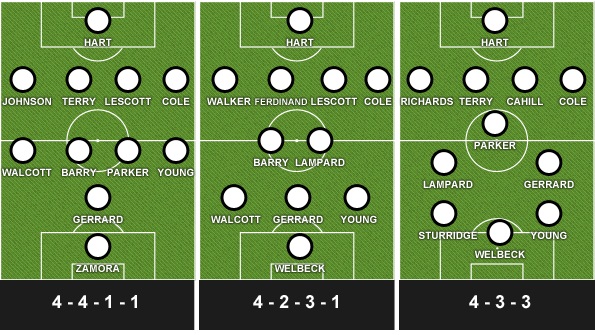 Darren Bent's injury and Rooney's suspension for the first two games at the European Championship has opened the door for another striker to make an impression.

The forward already doing that is Andy Carroll, who played a key part in getting Liverpool to the FA Cup final, and, once he was introduced as a substitute against Chelsea at Wembley, he turned the game's momentum.

Manchester United's Danny Welbeck has a better shooting accuracy and pass completion than Rooney in the Premier League this season, while Peter Crouch is the leading scorer among his challengers, but has not played for his country since the defeat by France in November 2010.
Bobby Zamora was a crucial player in Fulham's run to the 2010 Europa League final under Hodgson but has struggled for goals since joining QPR in January.

"Crouch has a great record and tends to score against poorer teams and we have a couple in our group," says Lineker. "The question is: do England want to change the way they play? He holds it up well, but he's not going to give you much in behind the opposition defence.

"The interesting thing is that Roy is generally a 4-4-2 man but England have been playing 4-3-3 recently to a relative degree of success. And when you have hardly any strikers to choose from, especially for the first two games when you can't pick Rooney, maybe it's easier to have just one and then have Ashley Young, Theo Walcott types on either side.

"Daniel Sturridge is in with a shout, too, so you might want to play that way rather than having two strikers."