Chelsea can prey on Barcelona's weaknesses

Chelsea midfielder Ramires was rightly lauded for his display in the first leg of the Champions League semi-final against Barcelona where his determination and energy helped him track right-back Dani Alves.

Their battle on the wing was a key feature of the game as Chelsea attempted to narrow the Catalans' attacking options and funnel them towards the centre of the pitch.

The versatile Brazilian will have an even bigger role in the return leg when Pep Guardiola's team will look to exploit the wider Nou Camp pitch, and it was no surprise Ramires was given a day off for the Premier League draw at Arsenal on Saturday.
Frank Lampard, Raul Meireles, Didier Drogba and Barcelona's Xavi were the only players to cover more ground than Ramires at Stamford Bridge, but he will have to be more disciplined on Tuesday.

Glancing back to Arsenal's efforts in the Champions League last season, when the Gunners' took a 2-1 lead to Barcelona for the second leg of their last-16 tie which they eventually lost, they were hindered by Samir Nasri's failure to shadow Alves.

Each time Barcelona gravitated towards the left in that game, a quick switch to the Brazilian on the right meant left-back Gael Clichy was up against his opposite full-back - leaving the Arsenal back four stretched.

And, after such a sterling and compact display by Chelsea's defenders in the first leg, they will not want to spread their players as the hosts aim to find the narrow holes in the middle of the pitch en route to goal.

Former Chelsea winger Pat Nevin said Roberto di Matteo's tactical plan was close to a "masterclass", but the 1-0 scoreline was as much down to Barcelona's poor finishing as it was the Londoners' approach.

"It worked a treat and the space behind Alves even led to the goal," Nevin said. "It will be more difficult going to Barcelona, but I think people have lost the fear of Barcelona, they still have massive respect, but they know they have weaknesses."

In planting three disciplined midfielders in front of the back four to deny Barcelona space, the biggest benefit was watching Lionel Messi withdraw deeper and narrower in order to pick up the ball.

It was a similar ploy to one used by Jose Mourinho's Real Madrid in recent El Clasico encounters, with centre-back Sergio Ramos taking the eye in Saturday's 2-1 win at the Nou Camp by quickly bursting from defence to confront Messi when the Argentine squeezed past the midfield block.

Forcing Messi high up the pitch played a vital part in Chelsea's goal, too, as Lampard's tackle on Barca's top scorer led to Drogba's solitary strike.

But in recent games against AC Milan, in the last round of the Champions League, Chelsea and Real Madrid you can see how the areas in which the Argentine operates have been clipped. 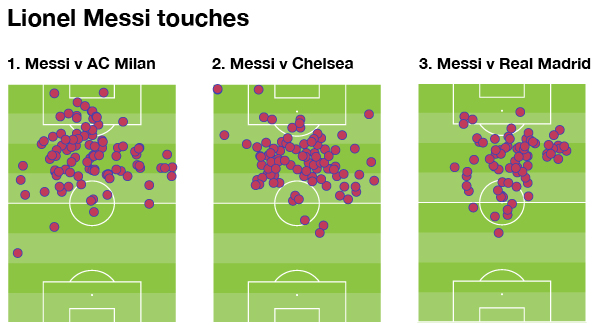 Concentrating on space rather than the ball was part of Chelsea's strategy as Fernando Torres, a watching substitute for the first leg, revealed this week.

"Many teams who play Barcelona think you have to steal the ball from them, but I don't think that's possible," the Spanish forward said.

"You have to use different weapons against them. If you want to steal the ball, you won't manage it and you'll get tired, and then create more space for your opponent."

Real Madrid, Inter - under Mourinho - and now Chelsea have had success with this ploy and it has drawn criticism as "anti-football" in some quarters.

But if a manager opts to go toe-to-toe with one of the best sides in football history, allowing Messi time and space to play his quickfire one-twos in front of the penalty box, there is likely to be one winner.

Defending is as much a part of football as attacking and, although Chelsea rode their luck at times, their team-work and dedication to a game plan was equally as impressive as some of Barcelona's attacking showings of the past.

There is still room for improvement in Chelsea's game and, in watching the Real victory on Saturday, where Sami Khedira scored a scrappy opening goal after Barcelona failed to clear a corner, Nevin says the spirits of the Chelsea players will be lifted.

"They have John Terry, Branislav Ivanovic, Gary Cahill and Drogba, who are far better in the air than anything Barcelona have got," the Scot added.

"Chelsea did go a bit Stoke City in the first leg, with Ivanovic throwing the ball long on several occasions, but it led to chances in the first half."

Whatever your views on those tactics, what cannot be faulted is the spirit and concentration shown by Di Matteo's team.

And with Barcelona beaten twice in the space of four days, were there signs on Saturday as they trudged off the soaking Nou Camp turf that perhaps they have lost a touch of their self-belief?