Walking away from Old Trafford last Thursday as Athletic Bilbao continued Manchester United's woes in Europe this season, there was a nagging feeling that the hosts had underestimated their Spanish opponents.

Roared on by 7,000 travelling supporters, Athletic's thrilling 3-2 victory in the last 16 Europa League tie leaves Sir Alex Ferguson's side needing to score at least twice in order to progress. And apart from the 6-1 defeat inflicted by Manchester City earlier this season, it is hard to recall a recent game where the Red Devils have been so outclassed.

As former Valencia and Liverpool boss Rafael Benitez told the Football Focus Forum this week: "I was talking with some former Athletic players and they were telling me that maybe United didn't realise how strong and how good Athletic could be."

The win for Marcelo Bielsa's team, who derive from the Basque region in Spain, was the product of a hard-working, well balanced and supremely technical performance.

And only a number of outstanding saves by Manchester United goalkeeper David de Gea, plus some clinical Wayne Rooney finishing on an otherwise poor night for the England striker, mean that this tie is still in any sort of balance.

Even though Ferguson said afterwards he had expected Athletic to be "very aggressive in terms of their attacking and pressing the ball", his team - without Rio Ferdinand, Michael Carrick, Paul Scholes and Danny Welbeck - struggled to contain their opponents and as the Scot admitted they were not helped by some poor defending. 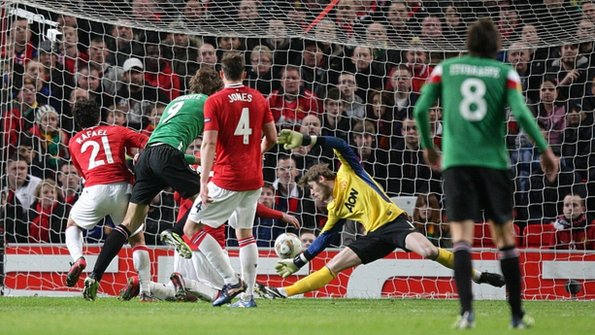 Indeed, Athletic's performance was reminiscent of another outfit which has been a thorn in Manchester United's side in recent seasons: Barcelona.

That should come as no surprise given that Barca boss Pep Guardiola regards former Argentina and Chile coach Bielsa as a mentor.

Bielsa, 56, who has been linked with jobs at the Nou Camp and Chelsea, is known in Spain as 'El Loco'. But the way he has imposed his methods on a team previously regarded as one of the most direct in Spain since he took over in the summer has come as a pleasant surprise.

The Argentine coach's young Athletic team came within a whisker of beating Guardiola's team earlier in the season and will face the Catalans in the Copa del Rey final. They are also in hot pursuit of a place in next season's Champions League.

True, Bielsa's team may not have the same calibre of players as Barca, but with six players aged 22 years or under starting against United, they are a team which is only going to develop.

"Our simple ethos is this: we try and win the ball back as quickly as possible from our opponents as far up the field as we can," Bielsa told me. "And by that I mean everyone is involved in regaining the ball, from the forwards through to anyone else.

"Then once we have the ball, we try and find a way of getting forward as quickly as possible, in a vertical direction if you like. But we don't get frustrated if we can't get it forward immediately, we aim to be comfortable on the ball, and if it's not a case of going forward straight away, we keep it."

Sounds simple doesn't it? But it is a formula that Manchester United struggled with and they will need to get a grip on the midfield battle when they travel to the Basque country on Thursday.

As notable as Athletic's pressing was, it was their attacking talents that lit up Old Trafford and it will be a brave person who predicts they will not score again at the Estadio San Mamés. For large parts of the game in Manchester, they effectively played with four strikers with Oscar de Marcos (10) supporting lone forward Fernando Llorente (9), as Iker Muniain (19) and Markel Susaeta (14) provided the width. 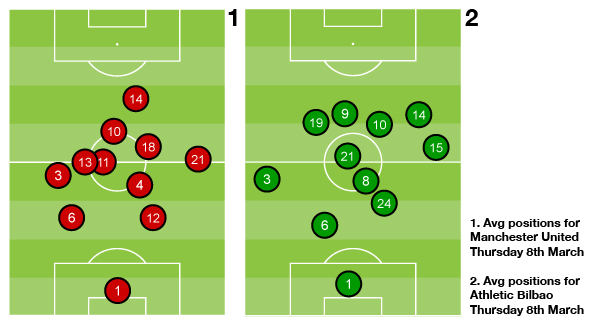 And there were several occasions, in keeping with Bielsa's previous methods, when the trio of midfield anchor Ander Iturraspe (8) and centre-backs Javi Martinez (24) and Mikel San Jose (6), were the only Athletic players not to be stationed along the United penalty area. It said something about the balance of the game that United were the counterattacking team with only 42% of the possession.

De Marcos, 22, and Muniain, 19, were exceptional, with both deserving of their goals, but Iturraspe was a dream to watch at times. He hounded Rooney to the extent that he was almost wearing the United striker's socks by the end, and he was always on hand to receive the ball while threading passes wide to build attacks. It was some performance.

It allowed Martinez, normally a midfielder, to venture forward causing yet more problems for the already overrun Ryan Giggs and Phil Jones in the centre of United's midfield.

So what will the Premier League champions change for the return leg?

For a start, Ferguson is likely to begin with a formation that better matches the Spaniards by using three central midfielders. When he did this in the second half at Old Trafford - helped by the introduction of Carrick - the team had more success in closing gaps that appeared before the break.

He will also have noticed that with Athletic full-backs pushing way up the pitch to maintain their width, United did have some success in the spaces behind them. Ashley Young began brightly on the right, but Nani may be preferred to Park Ji-sung, who had a relatively quiet evening.

More than anything, Ferguson will realise that his players will have to match the incredible work-rate that Athletic showed in the first leg. And they will have to cut out the sloppy passing that often gifted the ball back to their opponents.

Athletic will be wary of United's response, with last season's Champions League finalists likely to field a stronger side if they want to remain in the competition, but that will depend on how important Ferguson considers the Europa League now.

One thing is for certain: with such a youthful team determined to finish the tie off and build on a season of real promise, there is little chance of Los Leones (the Lions) sitting on their lead.

"We always go out to attack our opponents and go for victory," Bielsa said. "Sometimes it works, sometimes it doesn't, but we won't alter the style of play we have."