The case for Capello's defence

Less than 18 months ago it was no understatement to say that England's defence was in disarray, as the national team suffered a punishing 4-1 defeat by Germany in the second round of the World Cup.

So, whatever the merit of the 1-0 victory over Spain on Saturday, keeping a clean sheet against the world champions represents a progress of sorts.

Reaction to the game at Wembley has been measured, as it should be. The fixture was a friendly, Spain withdrew many of their best performers during the match and, although England achieved a fine result, they did it with a backs-to-the-wall display in which they defended for long periods.

But a key question arose in the aftermath: are these the kind of tactics we can come to expect against better opposition during the remaining months of manager Fabio Capello's reign?

And after several years spent bemoaning his team's lack of confidence in high-pressure games, is it a sign that his players respond better to a game plan where they defend for long periods and hit teams on the break?

His demands for a high-pressing game have, at times, had mixed results against top international teams. And compared to the game against France a year ago, the areas where England made the majority of their tackles showed a willingness to drop deeper. 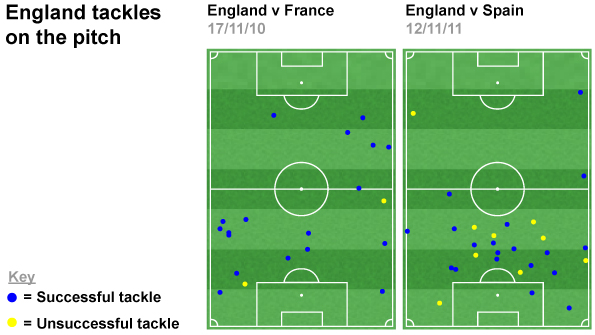 Cast your mind back to Bloemfontein and England's gung-ho spirit once Frank Lampard's "goal" had been disallowed against the Germans. At times the defence looked lost, and it had little protection in front of it.

Now, England have evolved into a team which tends to have two holding midfielders and another three players further forward who can attack in support of a lone striker or defend en masse as they did against Spain.

It is a formation which is far more structured in defence and can use the pace of quick forwards to spring counter attacks. And the system can be put to the test again when they face both Sweden on Tuesday and then the likely friendly against the Netherlands in February.

For all Spain's possession they did not trouble England's goal on too many occasions until the latter stages, when David Villa hit a post, Cesc Fabregas shot wide and Scott Parker nipped in to deny Gerard Pique.

In some senses England were fortunate as they were not fully punished for giving the ball away carelessly. But in keeping the spaces between the members of their back four to less than 10 yards, and executing countless well-timed tackles and interceptions, they showed that Spain were not the only technical team on show.

After all, is there no artistry or skill in defending? Capello's team made three fewer blocks against Spain than they did in their eight Euro 2012 qualifying games combined.

Perhaps Vicente del Bosque's side were not at their best, but they did not fully exploit the wide spaces that England's back four were willing to concede. 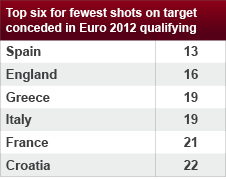 Both Villa and Andres Iniesta like to start wide and work their way into the middle of the pitch, but their intricacy on the edge of the box was shut down by the likes of Parker and the impressive centre-back pairing of Joleon Lescott and Phil Jagielka.

Without a recognised striker, Spain did not drag England's defence out of position and it was only when Fabregas and Fernando Torres were introduced that the visitors got in behind Capello's side more regularly.

By that time, England were sensing victory following Lampard's 49th-minute header and were also causing a few problems at the other end, with substitutes Danny Welbeck and Jack Rodwell giving added dynamism to their attack.

It was a game in which Capello's tactics and team selection were almost perfect. He gave vital experience to some younger players and the result will give a huge confidence boost to his team after the crushing disappointment in South Africa.

Critics will suggest that few matches will be won when the ball is given away so cheaply. And they would be right.

But a performance and a result achieved without Wayne Rooney, Ashley Young, Jack Wilshere and Steven Gerrard means that England have their best attacking talents to add to a defensive display which was of the highest order.

Compared to the World Cup, the European Championship offers tougher games from the start, and the win over Spain gives Capello an encouraging defensive platform from which to build on.

With less to fear from Sweden, the real test may come from striking the right balance between continuing that solidity while offering more attacking threat.