In football, a long-held personal view is that too much credence is given to formations.

They have their value, of course, and provide a good starting point when talking about how a specific team sets up, but most of the time they allude to a side's defensive positioning.

A manager's instructions to play 4-4-2 or a 4-2-3-1 means that a team, in theory, can be perfectly organised to close down space and not let the opposition cut through them. In attack, however, it is in a team's interest to let loose and offer all sorts of problems for the opposition defence.

That is one of the reasons why Barcelona cause so many headaches for teams they face. Trying to pin them to a formation is pretty pointless as it is often something like a 4-6-0, such is their ability to group in midfield and attack en masse.

Manchester City have yet to reach the same heights, but although they might have lined up in a similar formation to rivals Manchester United on Sunday, they showed a marked difference in the way their wide midfielders linked up, leading to the first two goals in their 6-1 victory. 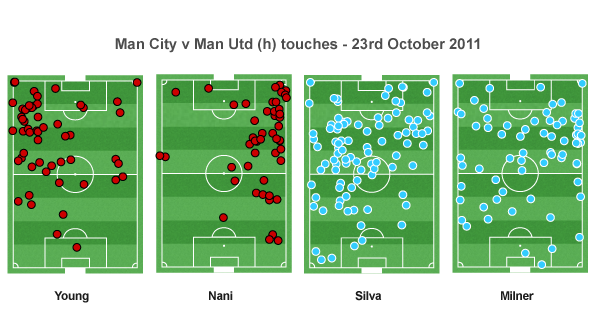 This blog has already drawn attention to the merits of David Silva this season, who is currently the Premier League's in-form player. And James Milner's importance to manager Roberto Mancini was highlighted by the Italian selecting the 25-year-old for such a crucial fixture.

Telling in City's win, though, was the way in which one of the pair continually switched wings to overload the left or right flank, causing havoc for United's full-backs Chris Smalling and Patrice Evra.

In combining this with an indefatigable work ethic, it showed an intelligence that United's wide midfielders did not really match.

Silva's grace means that he is given licence to roam wherever he pleases when City are on the attack, yet he was still committed enough to funnel back to offer cover to City left-back Gael Clichy.

Milner offered a similar diligence to help right-back Micah Richards, who had his hands full early on with United left-winger Ashley Young.

While Young showed the enthusiasm to both attack and defend in equal measure, both he and Nani limited the majority of their work to their respective wings. This, in turn, meant Darren Fletcher and Anderson had to put extra work in to cover the huge spaces between them.

In contrast, Silva and Milner popped up in different areas across the pitch and their positioning allowed them to link up with their fellow attackers, with central midfielders Gareth Barry and Yaya Toure taking care to fill in the gaps on either side.

"If you go to Old Trafford you know you are in for a hard game and United's strengths obviously are pace, with Nani on one side and Young on the other," Match of the Day 2 pundit Lee Dixon said. "Down the wings you have to stop them and also Wayne Rooney playing in the hole.

"City had two full-backs who were outstanding and in front of those the two wide midfielders Milner and Silva were absolutely sensational. Their work-rate was unbelievable.

"Clichy and Richards had great protection in front of them and when the full-backs were drawn to the ball, Silva and Milner offered cover in behind."

In a strong United opening, both Silva and Milner played their part as City defended resolutely.

But once the visitors had weathered that onslaught, Milner was clever enough to join Silva on the left, in one of City's first forays forward, and it was his cutback which created the opening goal for Mario Balotelli.

It was not all rosy for Milner and he did suffer some nervous moments, particularly when he unintentionally passed the ball back to Young in the City penalty area and was relieved to watch the United player's snap-shot go wide.

But the City staff would have been impressed that he was in that defensive position in the first place. On another occasion when he gave the ball away just before half-time, he sprinted 50 yards deep from the United half to track the overlapping Evra.

Once centre-back Jonny Evans was dismissed the task became easier for City. Again the second goal came when Silva received the ball on the right flank, combined with Milner, and crossed deep for Balotelli to put City in firm control.

For a United defence which has conceded the most number of shots in the Premier League this season and chose not to start with Nemanja Vidic, losing Evans was a terminal blow.

There are various theories as to why the normally tight defence has become so leaky this season, and the chopping and changing in three of the four defensive positions has hardly helped.

But attention must be paid to the lack of cover given by United's central midfielders and with Young and Nani often so wide, perhaps it is no surprise that gaps often appear in these areas. Fletcher and Anderson are simply being stretched too far across the pitch.

This issue was brought into sharp focus in last year's Champions League final against Barcelona and after Sunday's capitulation it seems that the United coaching staff still need to address it.

You could argue that both City and United played 4-4-2 at Old Trafford, but in an incredible game, it was City who showed how different those supposed formations can be.