Based on Manchester City's first two Premier League games, something seems to have shifted in the normally cautious mind of manager Roberto Mancini.

Actually, you can make that one-and-a-half matches because, since he introduced Sergio Aguero as a substitute to replace Nigel de Jong during the 4-0 win over Swansea in their opening fixture, City have looked close to unstoppable.

Granted, they will face sterner tests than they did against the Swans and Bolton, but in playing two strikers from the start at the Reebok Stadium, Mancini added deeds to his words after stating his intention to take more risks this season.

There were many reasons for the Italian to be cheerful: David Silva showed again why, according to Match of the Day pundit Lee Dixon, he is the Premier League's best playmaker; Edin Dzeko was able to receive the ball in wider areas in order to set up Aguero; and James Milner also took the game by the scruff of the neck in the second half to give City added thrust when they needed it.

Strangely enough, having recorded the highest number of clean sheets last season, it was the defence which looked vulnerable against Bolton. But without the injured De Jong and playing a four-man midfield, that may be a consequence Mancini and City fans are willing to deal with.

Mancini has already stated that his team need 15 goals more than last year if they are to challenge for the Premier League title. So another pleasing aspect may be that they have struck seven in two games, while also doubling the average number of shots and their cross completion rate compared to last season, all without Carlos Tevez.

Tevez was named on the bench against Bolton but Mancini insists he has a future at the club. Where he will fit in is another question - against Bolton they demonstrated they can have several points to their attack.

Mancini will now be content he has the players to enable him to adopt several tactical options, while Samir Nasri may still join.

Towards the end of last season, Yaya Toure played a key role in supporting Tevez from a five-man midfield. Against Bolton, he played in a holding position, allowing Silva and Milner to join the front pair of Aguero and Dzeko from the flanks.

To try to pin Silva down to a position, however, is close to impossible. The method in which the Spaniard ghosts in from the right proves he operates along different lines to most footballers.

The angles of his runs to receive the ball - and those of his dribbles and passes - are often diagonally from right to left, as can be seen from the graphic below. 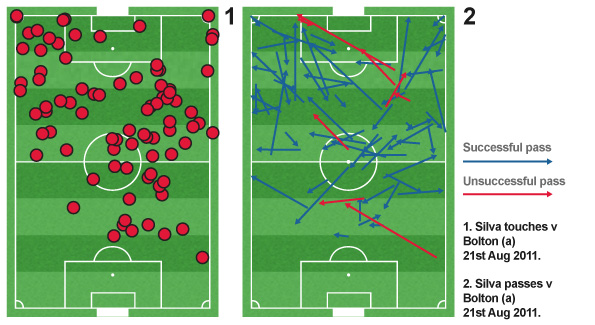 And although he is very left-footed, the way he can cut inside defenders at speed means he is difficult to tackle, as it takes the opponent time to shift his body into position to be able to attempt a challenge.

The clever thing, too, is that by cutting into space inside, Silva almost always has his body between the defender and the ball, so even though he is slight, his frame forms a natural barrier.

Dixon said: "When you look at how City play, their midfield is so important to them, to how they move the ball and to how they move players around. I thought Milner and Barry played really well.

"Obviously Silva is going to take a lot of the plaudits because he was absolutely brilliant. The way he links the play is just fantastic and in terms of the Premier League's best playmakers, he was equal to Cesc Fabregas before he left Arsenal."

With regards to Dzeko, just two goals from 15 Premier League games last term led several to question the £27m City paid to sign him from Wolfsburg in January. But as with so many who move to the English top flight, it has taken time for the Bosnian forward to adjust.

He certainly looked a far different prospect on Sunday, twice teeing up Aguero either side of Silva's opener for what should have been relatively straightforward finishes, and he has now scored as many goals and set up as many chances as he did last season. In hustling Zat Knight and guiding the ball past Jussi Jaaskelainen, he paired power and technique.

"He looks a different player to the one we saw last season," said former Arsenal, West Ham and Celtic striker John Hartson on Match of the Day 2. "And he looks like the perfect foil for Aguero. Already they have formed a great partnership and Dzeko is using his height and bulk, which we didn't see last season."

That Bolton stayed in the game was a credit to their persistence under manager Owen Coyle. But even he acknowledged the gulf in resources between the two sides by pointing out the personnel on the visitors' substitutes bench.

Buying the players is one thing but moulding them into a title-winning outfit is another. Yet, on this evidence, Mancini is developing his team into one with a lot more punch.