Having witnessed the Champions League final at Wembley on Saturday seemingly powerless to alter its course, Manchester United boss Sir Alex Ferguson will not be the only coach who came away warming to the challenge ahead.

Barcelona's invigorating display against the English champions will have got many people buzzing, but none more so than those in the coaching community, who will now spend the summer considering their methods and how they can improve further.

When Ferguson said, "we all have a challenge with Barcelona, not just Manchester United", he could have been speaking for the entire football world from elite level to the grass roots.

In the final analysis, there were many tactical questions about the game itself: should Ferguson have played five in midfield? Did switching Park Ji-sung with Ryan Giggs in the second half help United's attack? And would Paul Scholes' passing have helped maintain possession?

Yet it is arguable whether those alterations would have made any difference in trying to stop a team splendid in its awareness, control, passing tempo and movement. The passes to Lionel Messi and Wayne Rooney during the game show how much more integrated the Argentine was compared to his opponent. 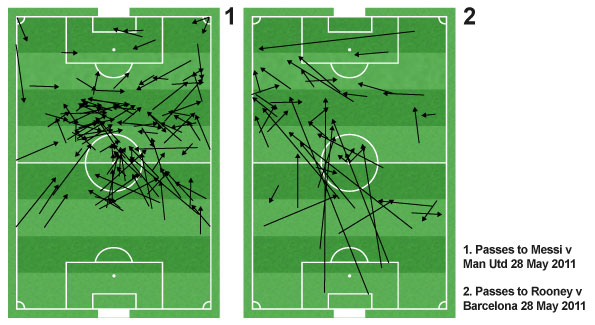 If you want to simplify what Barcelona did more successfully than United, it is merely that they kept the ball better. The end result is a football style so uncomplicated that it makes you wonder why so much fuss is given over to tactics, formations and the rest.

But if it looks so straightforward, then why isn't every team doing it?

The answer is that it is the result of superb technique and intelligence honed over thousands of hours of specific practice. And, it is also Barcelona's dedication to remain true to its principles from the bottom up, where six-year-olds are taught the same fundamentals as the first team.

The premium of always looking over your shoulder, a good first touch, the ability to play with both feet and teaching different passing rhythms are aspects which have been in place for years at the Nou Camp, having taken root during the years when the club had a Dutch influence.

They are facets which have been slow to be valued in this country, however, although it should be said that the state of coaching is improving, it is just that more quality is needed at a younger age.

Former Manchester United coach Eric Harrison is well aware of the differences in the game and said that recent displays by Barcelona only highlight them.

"About 90% of the coaching I do now is about awareness," he told me recently. "When you are in the right position in space, in between opponents, that means when you receive the ball you are nice and relaxed.

"The control, general technique and passing, are all good in English football, certainly in the professional game. But the selection process of where to be before you receive the pass I think is generally poor.

"Foreign teams just add that awareness and decision making that is better than ours."

Ferguson argues that more time is needed to work with youngsters, although students at Barcelona's La Masia academy do not receive more than two hours training each day.

"People have to understand the mechanics of the industry we are working in," he said. "We are only allowed to coach youngsters for an hour and a half [each day], Barcelona can coach every hour of the day if they want to.

"That's the great advantage they have got. It is a fantastic philosophy. We hope that in years to come our coaches will be able to spend more time with young kids, to teach them the basics, the technical abilities and the confidence to keep the ball all the time.

"We are good at it, but not as good as Barcelona at this moment in time. It is a wonderful challenge and we should always accept a challenge."

Take Xavi for example. 97% of his passes at Wembley were under 35 yards or less. Which half-decent footballer couldn't do that?

But would that player be sufficiently aware to take up the correct position, a skill underlined by the fact that Xavi covered nearly 12km, the most of any player in the final?

Could he decide who to pass to before the ball had reached them, control the ball with any part of his body, turn in any direction to shield it and then fizz or delay the pass according to the speed of the attack, all in an instant?

The fact that Xavi completed all but seven of his 148 passes, a record in the Champions League this season, shows how intrinsically his success is linked to that of the Spanish champions. Nowhere in football is there a conductor like him. 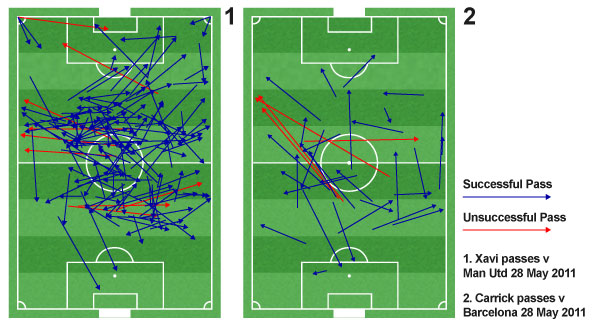 Not that the 31-year-old is on his own, of course. Behind him he has Sergio Busquets and alongside and ahead of him there are Andres Iniesta and Lionel Messi. Between those players they have the talent to take basic principles to an unprecedented level.

It is a measure of how interlinked the quartet are that Busquets found the other three with 44 of his total of 77 passes. Michael Carrick, on the other hand, found Ryan Giggs, Wayne Rooney and Javier Hernandez on 17 occasions from his total of 29 passes.

The first half was littered with incidents of Iniesta and Xavi picking the ball up behind Carrick and Giggs and running at the United defence. And it was evident in Barcelona's first goal, where Xavi looked over his shoulder to see this space and then received the ball from Iniesta.

As Xavi ran at Rio Ferdinand, ahead of him both Pedro and David Villa cut into the middle from wide positions, while Messi cleverly checked his run as Pedro ran into his space, meaning that Patrice Evra did not recover to a goal-side position.

The best was yet to come as Xavi bore down on goal. Pedro re-adjusted to a wider position where Evra should have been, allowing Xavi to slip the ball to him with the outside of his boot, where the 23-year-old coolly finished.

It was a goal so smart, so fluid, and so simple in its execution, it is worth watching again, and from behind the goal, if you can.

United simply could not cope with this. Would a five-man midfield have made any difference? Maybe, but they did that in the 2009 final and Barcelona found a way to win that evening too.

At least Ferguson took a different approach this time, and in glimpses they looked like they might be able to compete, especially when Rooney tucked away his fine equaliser after 34 minutes.

But even the Scot admitted afterwards that his team had been outclassed.

For someone approaching his 70th birthday that might be a daunting prospect, but Ferguson is in no doubt that the challenge to match Barcelona in the coming years is one that he, and other European clubs, will relish.

"Finding a solution is not easy but that is the challenge," he said. "You should not be afraid of the challenge. Maybe this could be the kind of stepping stone we had when we lost 4-0 [to Barcelona in 1994]. We improved from that. We want to improve. Next season may see us improve even more.

"It is not any consolation to say you are the second best team. We don't enjoy that. Any club with the history we have - Real Madrid, AC Milan - would say the same."

The challenge for United and other European clubs is that with Barcelona having set the bar so high and having players who are fully integrated into their style of football, the type of fundamental change we are talking about may take years to accomplish.

In the meantime, the hope is that coaches and young players will look at the 2011 Champions League final as a textbook example of how keeping the ball can look so simple, yet prove so effective.

Of course, you need some special players to deliver such a devastating performance but at least there is a higher ground to aspire to and Ferguson and the rest of us have all been witness to it.

This is no time to lambast Manchester United or the English game. United are a fine club and have had a good season. The state of coaching in this country is improving.

But a lesson like Barcelona's is always a good reminder to those in football how far they still have to travel.