Who would make your all-time Manchester XI?

A bit of a departure from the usual tactical analysis this week, more a debate on team selection ahead of Saturday's mouth-watering FA Cup semi-final between Manchester City and Manchester United at Wembley.

With both sides packed full of star names, it looks like being a fantastic occasion. But to whet the appetite ahead of what is sure to be a hotly contested match, our colleagues at Radio 5 live have posed the following question:

Who would get into your all-time Manchester XI?

City connoisseur and broadcaster Stuart Hall, die-hard United fan Terry Christian and respected Daily Telegraph writer Henry Winter have been locked in discussion about their star-studded XI. You can hear how they came to their decisions on BBC Radio 5 live Sport on Saturday but we can reveal the team below. 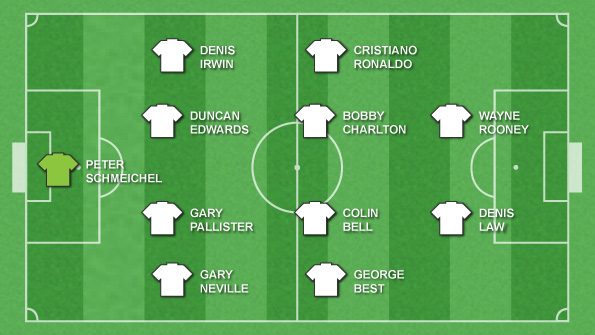 You will notice there are some shock omissions. But what do you think? Now it is your chance to give us your opinions. Do you agree with the selections of Hall, Christian and Winter? If not, who would you select for your greatest ever Manchester team?

You can listen to the full debate on Radio 5 live from midday on Saturday. Live commentary on the game begins from 1715 BST.