So Manchester United's 29-game unbeaten run in the Premier League has come to an end. Who guessed it would have been Wolves, the division's bottom club on Saturday morning, who inflicted the damage?

Not many, perhaps. Yet coming after the wins over Chelsea and Manchester City at Molineux, the 2-1 victory showed that Mick McCarthy's side are more than a match for some of the league's biggest teams.

Goals by George Elokobi and the industrious Kevin Doyle cancelled out Nani's opener but there was evidence from the back to the front that Wolves deserved their victory.

The problem now for McCarthy is to maintain that sort of form against lesser teams, a key factor if the Midlands outfit are to stay up.

"During the second half you were expecting an onslaught by Manchester United and they attacked in little bursts. But whatever they threw at Wolves, the home side handled really well and defended so well too."

Resolute defending was also a feature of Wolves' wins over Manchester City and Chelsea at home this season, where they only allowed two and three shots on target all game.

Chelsea usually average more than double that figure but the reduction was, in part, down to the Wolves defence willing to put their bodies on the line, blocking six of their attempts on goal.

On Saturday, Manchester United only had four shots on target all game, where they usually average about six, but with Wolves only blocking three other shots it shows how much the visitors petered out in the second half. 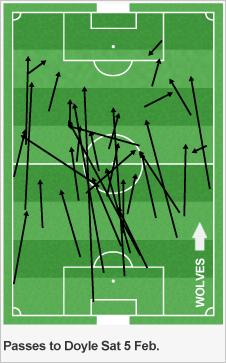 Some of that was down to the indefatigable Doyle, who allowed the Wolves defence time to breathe by maintaining possession even when the ball was hit long to him. Judging by the passes he received in the graphic to the right, that was an awful lot.

McCarthy's team were also clinical in front of goal. From only five shots they scored twice, a similar story to when they beat Chelsea with a goal from only three shots.

In three other games this season - against Aston Villa, Birmingham and Blackpool - their shot total has hit double figures with only one goal as a return, whereas in five other matches more than 10 shots on goal have yielded nothing.

"Kevin Doyle up front was magnificent," stated Shearer. "He worked his socks off, he worked the channels, he held the ball up and he was brilliant.

"I'm still not totally sure if he got a touch for the second goal but he deserved it because of his work rate all afternoon."

As good as Wolves were, Manchester United finally came unstuck having spent most of the season getting results without playing well. This time they forgot the first part.

The signs were there: only an injury-time winner from Park Ji-Sung separated Sir Alex Ferguson's side and Wolves at Old Trafford in November.

More recently, another late comeback saved United from defeat at Blackpool, where Ryan Giggs helped turn their fortunes around, and a similar scenario was repeated in the FA Cup tie at Southampton where they came from behind to win 2-1.

Even before then at Tottenham in January, it was a vintage performance by centre-backs Nemanja Vidic and Rio Ferdinand that were the most outstanding aspects in a display in which the forwards and midfield failed to fire.

In all of this, the reliance on veterans Giggs and Scholes may be the most worrying aspect for United fans.

While others have scored goals, they have provided more zest and energy to the centre of midfield, where the likes of Darren Fletcher, Michael Carrick and Anderson have failed to do so.

Driving runs by Giggs on the ball have been matched by Scholes' never-ending capacity to gamble on getting into the box. This was emphasised when he replaced Carrick on Saturday and was more involved in advanced and wider positions. 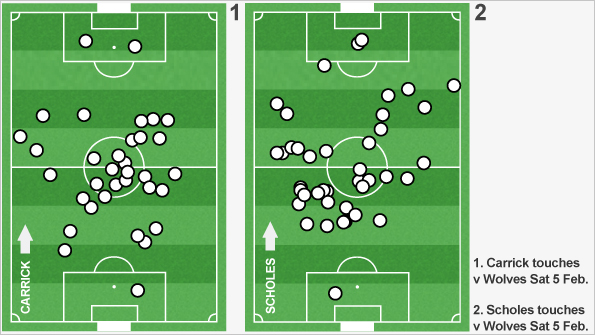 Comparisons with the other top four teams show that United appear to be lacking a creative influence from the middle of the park.

Arsenal have Cesc Fabregas, Tottenham have Rafael van der Vaart and Luka Modric, Manchester City have David Silva and Yaya Toure, while Chelsea can usually rely on Frank Lampard, whose injury-hit season has contributed to his team's stuttering form.

Only Manchester City are in the same category when it comes to shots and goals from central midfield but that is only because manager Roberto Mancini prefers a more defensive approach, with the likes of Nigel de Jong and Gareth Barry anchoring the midfield.

Fletcher, Carrick and Anderson make up three of the six central midfielders from the top five clubs who have taken the least number of shots. (John Mikel Obi, Nigel de Jong and Wilson Palacios are the other three.)

And together with Scholes, they have totalled 31 attempts on goal, at an average of only 0.6 shots per game.

Does that indicate where Manchester United need to improve? Or with them still sitting pretty at the top of the Premier League table is it an overplayed issue?