Bale and Rafael square up again

Teams that have had success against Tottenham this season have generally been able to nullify the threat of Gareth Bale and Rafael van der Vaart.

That is no easy feat with even Champions League holders Inter Milan feeling the full force of the pair, who have scored 22 goals between them in all competitions.

But one player who has been credited with curbing Bale's forays down the left, in particular, is Everton full-back Phil Neville.

The 33-year-old's no-nonsense approach helped ensure that David Moyes' team ran out 2-1 winners against Spurs at Goodison Park earlier this month, having already picked up a point at White Hart Lane in October.

Manchester United are Tottenham's opponents on Sunday but even though they possess a right-back who is 13 years Neville's junior, there are increasing signs that the Brazilian Rafael is beginning to show the reasons why Sir Alex Ferguson brought him to the club from Fluminense in 2008.

One thing Neville and Rafael had in common when they came up against Bale this season was limiting their ventures down the flanks to join their respective teams' attacks.

Contrast this with Inter right-back Maicon, who was the first of the three right-backs to face the Welsh winger during 10 days in October.

Even though the Italian team were 4-3 winners at the San Siro, Bale's second-half hat-trick made world football take note because he exposed Maicon's attacking tendencies so clinically. 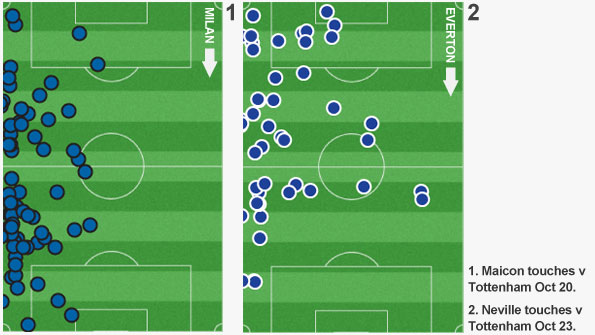 Touches from that game show that the Brazilian defender was far more active in the opposition half compared to Rafael and Neville, who faced Bale three days later at White Hart Lane.

You could argue that the former England defender had the benefit of playing a fatigued Bale so soon after the Champions League game.

But Neville's experience told him that if he remained disciplined, with right midfielder Seamas Coleman tracking back, he could allow Bale to approach him from deeper positions rather than be caught high up the pitch and be beaten for pace on his blind side.

In addition, when Bale received the ball towards the final third Neville was quick to close down space, particularly when the winger had his back to goal, and his success meant that Bale switched to the right flank during the second half of the 1-1 draw.

Rafael took a similar approach during the course of United's 2-0 victory over Spurs at Old Trafford.

One of the 20-year-old's runs led to him shooting wide early on but once United took a 1-0 lead after 31 minutes, he was less adventurous. He was also quick to shadow Bale when Spurs were on the attack so that he was unable to open up a gap to use his explosive pace. 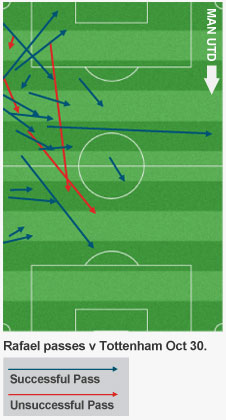 With Nani ahead of him it was Darren Fletcher in the centre of United's midfield who helped him out. Yet during his 64 minutes on the field where he marshalled Bale with considerable success, Rafael only made four passes in the opposition half.

And during that time, Bale managed to get past him just twice.

Former Spurs defender Gary Mabbutt believes that Tottenham's superb home form this season means that Ferguson's side will again be cautious this Sunday.

"Spurs have set their stall out this season with a very attacking 4-4-2 formation at home and I'm sure it will be Manchester United who adopt a defensive position and try to hit Spurs on the counter-attack and at set-plays," he told BBC Sport.

"They will try to nullify Bale, Van der Vaart, Roman Pavlyuchenko, Aaron Lennon and Jermain Defoe, who could also play, but one thing that has improved about Harry Redknapp's team this season is that they are getting goals from all over the pitch."

Some of the goals scored by Bale, including his strikes at Inter and Stoke, have lit up Spurs' displays this term.

But the 21-year-old will want to improve on his performance last time against Manchester United, where he gave the ball away in open play more than against any other team Spurs have faced this season. 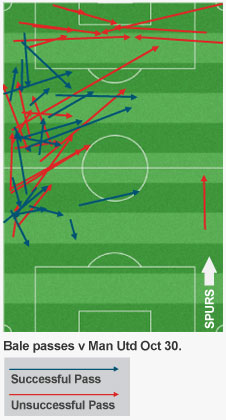 His crossing was poor too. Not one of his seven attempts reached its target and his pass completion rate was just 58%. Even his dribbling was below his usual standard, with a 22% completion rate compared to 67% against Everton.

That may have been down to tiredness but even though the 10-day period might have had a physical impact on Bale, Mabbutt is sure it would have improved his tactical thinking.

"Phil Neville might have played well against him but Bale is learning all the time, so if players try different tactics on him he is bright enough to work out ways to solve those problems," he said.

"Teams have put two players on him but he now realises he can pull out wide and create space for others in the middle such as Van der Vaart. You never stop learning throughout your career and with Bale being so sharp, and having the ability to match, he will continue to grow in stature."

The question is, will Bale have learnt the lessons from Old Trafford in order to make an impact this Sunday? Or has Rafael improved further since they last squared up?