One of the last interviews Benazir Bhutto gave to BBC World was on the day President Musharraf said he would be lifting the state of emergency. She'd been stuck in party meetings all day and we managed to get hold of her on the phone about five minutes before the programme ended. She was fluent, articulate and media-savvy as ever, without giving much away - but unfortunately we had to cut her off because we were running out of time.

About 10 minutes later one of her close aides, Sherry Rahman, phoned me, saying, "Bibi would like to speak to you". She came on the line, and asked in her usual disarming way, "Rita, what happened, did I say something wrong?" I explained that the presenter had had to end the interview as he was getting a countdown from the director. She responded by thanking me for the explanation and asking if she could be given a similar warning the next time she came on air.

Little did I know that this would be our last conversation.

There has been concern that the coverage of Benazir Bhutto’s death has tended to whitewash her record - her two terms as prime minister ended with dismissal for corruption and abuse of power. Media commentators have also highlighted Benazir’s studious courting of the foreign media. This I had first-hand experience of. In our brief encounters over the years she always came across as unfailingly charming - and sometimes surprisingly frank. Every now and then when I called one of her advisers to request an interview, Benazir would come on the line for a quick word. Once I addressed her as "Ms Bhutto," and she immediately cut in, saying, "call me Bibi, my friends do." 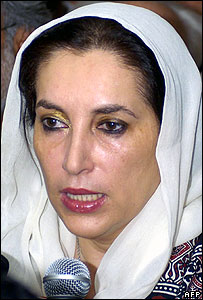 I first met Benazir Bhutto when her then bitter rival Nawaz Sharif was prime minister - she would come in to BBC TV Centre to denounce him and his government. But the old adage, “my enemy’s enemy is my friend” seemed to apply after Mr Sharif was thrown out of power, when they both joined forces against Musharraf.

I remember a book launch by one of Ms Bhutto’s supporters, who had written a biography of her and her family. The venue, in central London, was packed with her PPP (Pakistan People's Party) loyalists, Pakistani and foreign journalists, and some British politicians. About half-way through the evening a group turned up with flowers, which were presented to Ms Bhutto. They were from her once-hated adversary, Nawaz Sharif.

Her ability to switch alliances for political advantage was in evidence after the 1999 coup, when Nawaz Sharif was sacked by Pervez Musharraf. Initially she welcomed the move but was back in the studio three months later to condemn President Musharraf’s performance. Is the honeymoon over, I asked her as we waited for the interview to begin. She responded with a rueful smile, “all marriages are made in Hell." Sadly, there wasn’t another opportunity to follow this up.

She was conscious of her image and occasionally appeared to be unsure of what position to take on an issue. It wasn’t easy to tell if this was an affectation, or genuine uncertainty. After the 2002 election, Bhutto’s PPP emerged as the party with the largest number of seats, but not enough to form a government on its own. The question was if she would join an alliance with President Musharraf, a breakaway Pakistan Muslim League faction and other smaller parties. We weren’t able to extract a clear answer from her, but while the cameraman was packing up she turned to me and said, "Rita, what should I do?". She told me she was getting conflicting advice - to throw her lot in with Musharraf so she could still exercise some political influence, or to join the opposition to avoid becoming tainted by association with him. Flattering though it was to be asked, I can’t imagine that an astute politician like her would be seriously seeking advice from a journalist.

After that interview, when she had vigorously batted off questions about allegations of corruption, I told her that many people still asked where her money came from. She hit back at me. "Why don’t you ask where Pervez Musharraf or Imran Khan get their money? I come from a wealthy family, my father was wealthy, my husband is wealthy and I have my own money. I can afford to buy a diamond necklace if I want." She told me, as an example of her own substantial earnings, of an offer of several thousand pounds for a two-week lecture tour of the USA.

Back in July 2007, Nawaz Sharif and Imran Khan had been in the UK to try to organise a common front against Musharraf, at a time when speculation was rife about a deal being negotiated between Musharraf and Benazir Bhutto. We had arranged to interview her about her plans, and I happened to mention that we had interviewed Nawaz Sharif and Imran Khan a couple of days earlier. She was eager to know what they had said. I told her that they seemed disappointed that she hadn’t joined their alliance and had only sent a representative to their talks in London. She said she felt Imran Khan and others were wanting people out on the streets, but that she believed this was too early. She said there was a risk that any mass action would provide the military with another excuse to clamp down. “Who knows,” she observed cryptically, “we could end up dealing with another general.”

On another occasion we were among many journalists clamouring outside a house in central London where she was due to give details of her plans to return to Pakistan after eight years in exile. Once the door opened there was frantic heaving and shoving to enter the room where Benazir was giving the news conference. Our interviewer Nik Gowing and camerawoman Nicola Pugh fought their way in to be closer to her when she started speaking. I was stranded just outside the main room, with my head jammed against the wall in the crush.

At the end, I was told that Ms Bhutto had to dash off to Dubai to see her family, and wouldn’t be able to give us a separate BBC interview. As it happened, I was now first in line as she and her entourage were making their way out of the room. Sherry, her aide, spotted me in the crowd and suggested that this was my chance to have a brief word before Benazir left London. She saw me, and greeted me warmly with a hug. I took the chance to ask for a brief interviews. She agreed but insisted that it had to be quick. We were ushered through the next door into what turned out to be the kitchen. After hurriedly clearing away the saucepans and plates cluttering the kitchen, Nik managed to do the interview - while we hoped viewers would not be baffled by the microwave oven in the background.

After just under a decade in self-imposed exile, there is absolutely no doubt that Benazir Bhutto was convinced that she had to return to Pakistan this time, despite threats from militants, if she was to retain her credibility as a political leader. She was desperate to be in power again and seemed certain that this dream was within her grasp. Whatever her flaws, Benazir Bhutto was dynamic and charismatic and was a unifying force with qualities which inspired her supporters to risk their lives with her, and for her.

I was only one of hosts of other journalists on the periphery who were made to feel, however fleetingly, that she was their special friend.