For the past year, the BBC has been trialling video podcasts - or vodcasts as they've become known. You may have downloaded - and hopefully enjoyed - offerings from programmes like Newsnight, Breakfast and the Ten O'Clock News.

As planned, that trial finishes at the end of July, and those services will disappear while the BBC assesses the project. Some may come back later in the year while others may not. We need to be sure that products offer real value for the audience before we launch them back onto the market.

The trial itself has been an interesting process and I think the teams behind the vodcasts have learned a great deal from it. Some offerings have really taken off. Some have been slower to gain a following, although generally, we've had a good response from the audience.

If you used the services, thanks. We hope you enjoyed them and found them useful.

STORYFix is ending. It was part of a video podcasting ("vodcasting") trial run by the BBC. That trial finishes at the end of this month, and so does STORYFix.

There won't be a "best of" DVD. Neither will there be a Christmas special.

As they say in the media, the team will be moving on to other projects, having learned a lot from the project. Thanks for subscribing and thanks for e-mailing in.

UPDATE, MON 07:30 PM: Thanks for all your comments - I've responded to some of them here.

Climate on the rocks?

Why land a reporting team on a huge island of ice adrift in the Canadian High Arctic?

Partly because they can hitch a lift on a research team's plane. Also because it makes great television. But also precisely because it's a huge island of ice adrift in the Canadian High Arctic.

Ayles Ice Island spent 3,000 years attached to the Arctic mainland, but two years ago it split away. The fact that it's now floating free is taken as an indicator of the pace and extent of global warming.

David Shukman's reports from the High Arctic have been part of the Ten O'Clock News's focus on climate change and what it means for all of us. Ayles Ice Island is a spectacular symbol of those changes, and we felt it was important to tell people what's happening to it.

There's now a tracking beacon planted on the island - which happens to be the size of Manhattan and weigh two billion tonnes. We'll shout if it gets any closer.

System of a Down

Apologies, but technical problems meant Friday's STORYFix didn't make it as a video podcast, although it was available to watch online and via the News Multiscreen on TV.

We should sort it out soon, and it should be available at some stage today. Apologies again.

UPDATE, 1700: Video podcast system interface now working. STORYFix available again as a download. Apologies for the inconvenience. We promise to read the manual before Friday.

Thanks, by the way, for the positive comments. And for the un-positive comments. Not sure it's my place to agree with Milly Anily when he or she says it's brilliantly put together, although I like it, obviously. And of course John Charman is quite within his rights to find it not big, not clever, and certainly not funny. Although, it's not supposed to be big or clever. In the traditional sense, anyway. (Although it is supposed to be funny).

STORYFix is now available as a news take-away video podcast (vodcast?). Get it via the BBC website, or, excitingly, from iTunes itself, although it's yet to displace Ricky Gervais - or Newsnight, for that matter - at or near the top of the Apple hit parade.

It's the same content, brought to you in a different way. Let me know what you think.

Mark Barlex is responsible for STORYfix

By day I work on the BBC's One O'Clock News. By night, and during my lunch-hour, I look after a project called STORYFix, which is uniquely difficult to explain. So here's a Q&A.

Q. What is it?
A. It's an experimental weekly video round-up of what's been happening over the past week.

Q. Is it really?
A. Sort of, yes. Actually, it's less about what happened on Monday, Tuesday, Wednesday etc, and more about the impression we're all left with come Friday morning.

Q. How long is it?
A. Originally, it was supposed to be about 20 minutes long, but it turned out to be about five. At most.

Q. What does it look like?
A. It's very fast. It's got about twenty graphics and a hundred shot changes in it. 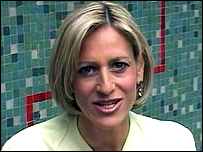 Q. What's it for?
A. It's trying to do news in a different way, hitting a particular audience. It's an experiment.

A. Where can I see it?
Q. News 24 at about a quarter to eight on a Friday evening, and from time to time over the weekend. And on the BBC News website's News In Video section. And on the News Multiscreen. And here.

Q. Is it any good?
A. Not for me to say, really. Some people really, really like it. Some people just hate it. You'll have to decide for yourself.