So it's here. School Report News Day 2013 is upon us - and about 1,000 schools are due to take part, making the news that matters to them.

They will appear across BBC News - on TV, radio and online and on regional news programmes.

The project is now in its seventh year, and is bigger than ever. School reporters are in Canterbury to witness the enthronement of the new Archbishop of Canterbury Justin Welby, and we also return to the Olympic Park in London to examine the legacy from the 2012 games. And there's more - the BBC School Report website has full details of the range of topics being covered.

It is all a far cry from when we began. A small team started School Report with the aim of giving teenagers the opportunity to make the news they thought mattered. Giving them hours of BBC airtime was nerve-wracking, but it proved to be a success.

In that first year - 2007 - we worked with 12- and 13-year-olds in 120 schools. What I most remember from that year is seeing school reporters on the Six O'Clock News and thinking that this partnership between schools and the BBC had developed into something bigger than we ever thought it could be.

Fast-forward to 2013 and we are able to reach even further, both in geographical terms and into the BBC's output. We'll be broadcasting live from Radio Foyle in Londonderry, and taking over the flagship Radio 4 programme Woman's Hour.

There will also be a dedicated School Report Live channel accessible through the Red Button. We'll be updating a live news feed on our website and our @BBCSchoolReport Twitter feed throughout the day, so please follow what our school reporters are doing and let us know what you think.

"Legacy" is a word that you can't escape at the moment - and when it comes to finding out what young people think about the Olympics and Paralympics, BBC News School Report has been giving pupils the chance to report on everything to do with the 2012 Games. 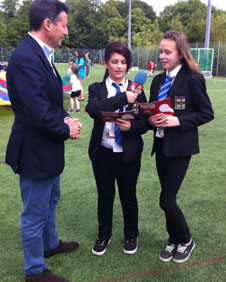 With the torch relay coming to a close, School Report's unique news deployment - involving a 90,000-strong team of reporters - continues to tell the story of 2012 from the perspective of young people.

For the past five years, School Report has helped 11-16-year-olds report their own news. But with 2012 being such a special year, we decided to try something new. I wrote to every secondary head teacher in the UK, inviting their schools to join the BBC's 2012 reporting team. More than 1,000 head teachers signed up, committing about 90,000 pupils to the cause.

Since our News Day in March - featuring everyone from the prime minister to Elbow - schools have continued to file reports from all the main events of the summer, including the Diamond Jubilee and Euro 2012 and all 70 days of the torch relay. As Lord Coe put it: "School reporters have followed us every step of the way."

Here are some of my personal highlights - and of course there's much more on the BBC School Report site. 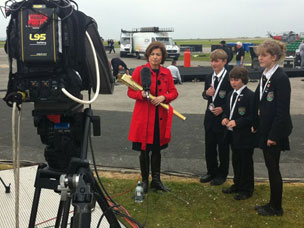 Mounts Bay Academy and Cape Cornwall School in Cornwall got exclusive access to RNAS Culdrose, where the Olympic flame arrived in the UK. Making a film and appearing live with presenter Jane Hill on the News Channel, the reporters met the air traffic controllers who had first sight of the torch, and stood on the tarmac where the plane landed.

Students at William Brookes School in Much Wenlock had a special reason to be excited when the torch came to their school. Their town is the place which inspired the modern Olympics thanks to a certain Dr William Penny Brookes. When the flame arrived, school reporters Tara and Zach brought the experience to life, recording their own commentary on an iPhone.

On World Sports Day in June, school reporters were in Sheffield as Lord Coe returned to his old school. It was the second interview he'd given to students from Handsworth Grange Community Sports College. On our Big School Trip to the Olympic Park in March, he gave them the exclusive that he was running with the torch in his hometown.

Harry from Charlton School has been one of our star reporters this year, covering the 2012 story all year. In March he was at the Olympic Park grilling Lord Coe about the legacy of the Games for children with disabilities and when the flame came near his school, he and fellow reporter Charlie went out to cover the event.

Students from The Bridge Academy in Hackney caused a stir with their reporting, with BBC Sport's James Pearce tweeting: "These kids have given you an exclusive..." - the very first pictures of the BBC's Olympic studio.

Schools have broken up for the summer now but some school reporters will be carrying on during the Games. Look out for their reports on the BBC School Report site and on BBC World, Radio 5 live, News Channel and Newsround.

Tomorrow BBC News will be joined by 30,000 School Reporters. These 11-14-year-olds have been learning about journalism at school with the help of their teachers and the BBC. Their task is to complete their own reports by 14:00 GMT and upload it to their school websites. We're linking to them all so BBC audiences can get the news from more than 800 schools. 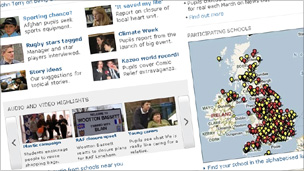 With all that's going on in the world today - the Budget, the crisis in Libya, the earthquake in Japan - what will they prioritise? It's difficult for the BBC to make choices about which news stories to cover so how will the students? If you're an 11-14-year-old living in the UK, what is important to you right now?

We recently conducted a School Report survey which gives an interesting insight into the world of some of our young reporters. About 24,000 children from School Reporter schools completed the questions, many relating directly to the 2011 national census.

The results have been sent to the schools that took part to use on News Day. I was struck by the low numbers choosing the answer "being famous" to the question what do you hope to have achieved by the time you are 30. It's the fifth year for School Report and the young people who work with us always confound the media stereotypes.

On News Day, there will be seven hours of live TV and radio coverage through the School Report website and red button. And this year we'll make history with the first live television broadcast from the new Studio Block at MediaCityUK in Salford. In London, School Reporters have interviewed the prime minister at a School Report press conference at Downing Street. Ed Miliband did the same at a school in Lambeth. Students have also interviewed Nick Clegg in his office, and there will be interviews with political leaders in Scotland, Wales and Northern Ireland.

We'll be updating a live news feed on our website and our @BBCSchoolReport Twitter feed throughout News Day, so please follow what our School Reporters are doing and let us know what you think.

Can the gap be narrowed between how teenagers create and broadcast their own content via the internet and mobile phones and the traditional news broadcasters?

Young people complain that we only see them on the news when they’re in trouble but what stories would they choose if they were in charge? On Thursday 13 March, BBC News is working with more than 250 schools across the UK to turn thousands of teenagers into news broadcasters for the day.

Over the past few months BBC journalists and other broadcast professionals have been working with 11-14 year olds so they can broadcast their own news to a 1400 deadline and publish it on their school website – with a link to our own School Report site.

More than 10,000 have been involved over the year and around half that number will be working on News Day making this a massive journalism deployment.

Stories that have already been filed include items on social networking, mobile phones, living with cancer, and campaigning on Darfur. Other school reporters have covered battery farming, what makes them happy and media images of teenagers. 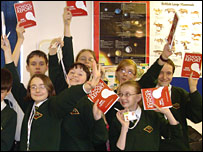 We have films on what it means to be Scottish in the Highlands, contraception and the state of school toilets. There are teams of students interviewing political party leaders including the PM in Downing St.

Other students are reporting on News 24, Radio Five Live and 40 local radio stations - as well as at outside broadcasts in Belfast, Aberdeen and Snowdonia. And there are web-based radio and TV “channels” for the day being streamed live on the website.

But will the hard work of all the schools, students and professionals involved pay off? What will the audience think of their reports? Tune in and let us know.

Nerve-wracking doesn't come into it. I've deployed thousands of news reporters, with no previous experience, to cover the stories of their choice - and given them hours of BBC airtime to do it in.

Thursday 22 March is News Day for the School Report project.

Over the past few months BBC journalists and other news specialists have been working with 12-13-year-olds in more than 100 schools throughout the UK to help them get ready to broadcast their own news simultaneously to a 1400 deadline.

There are teams of students interviewing the full set of five political party leaders including the PM in Downing St.

Other students are reporting live on News 24, Five Live and every local radio station - as well as for BBC Scotland, Wales and Northern Ireland.

And on top of that we’ve created the first news channel dedicated to schools for the day via a webcast – School Report LIVE - to showcase everything the school reporters are doing.

But will it work? Will the students meet their 1400 deadline? Will the forecast for snow in some areas of the country mean I’ve suddenly lost half my staff? Will their news be legal and decent? But, most of all, will it be interesting?

I’ve been really engaged by the reports that have already been filed on crime, and friendship and the environment and even pensions – but will a wider audience feel the same? Tune in and see.