End of an era for The World Tonight

The end of an era - that's what colleagues and the twittersphere are saying about the decision by my long-time colleague, Robin Lustig, to step down from presenting The World Tonight on Radio 4 and Newshour on World Service. 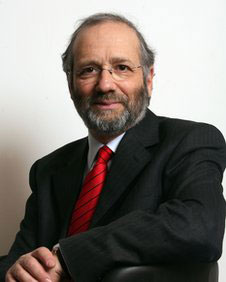 I first met Robin when I joined The World Tonight as a youngish producer back in 1994 and we quickly developed a close editorial understanding, we share the same interest in international affairs and the same desire to get to the bottom of why the world is the way it is, and we have worked closely together both at Radio 4 and the World Service since then. He is an outstanding journalist and an example to all of us, both professionally and personally.

His encyclopaedic knowledge and quick-wit allows him to switch from covering international to British stories at the bat of an eye. One example sticks in my mind. On 4 June 2009, we had planned a special edition of the programme to mark two important anniversaries in recent world history. It was 20 years since Solidarity's victory in first free election in Poland since the war and also 20 years on from the crushing of Chinese pro-democracy protests in Tiananmen Square; the day two parts of the communist world took very divergent paths. It's the kind of big idea Robin loves getting his teeth into.

So off he went to Gdansk with a producer and we had inserts into the programme planned from Beijing. Then a couple of minutes before we went to air, the Labour cabinet minister, James Purnell, resigned from Gordon Brown's government calling on Mr Brown to stand down. We had to drop much of the planned material on Poland and China and lead with the Purnell story. The team in London set up a sequence of live interviews for Robin to do from Poland and he had to do them without much chance to brief himself. Of course he carried it off with his usual calm authority, then, apparently effortlessly, switched back to the now slimmed down special on how and why communist systems diverged on that day 20 years before.

This shows just how difficult an act to follow he will be. He will be missed by audiences here in the UK and around the world, and I will miss him a lot because he is also a really warm and supportive friend and colleague. One way to convey his humanity is that last year, when I had to spend several months in hospital being treated for cancer, he came to see me regularly and not only helped keep me sane but also saved me from the vagaries of hospital food with his own meals on wheels service.

But he is not retiring, he says he wants to go back to reporting and, if we are lucky, he will continue to be heard on our air waves with interesting stories from interesting climes.

Alistair Burnett is the editor of The World Tonight.

For anyone interested in the intricate arts of search engine optimisation and how it works in relation to news, our in-house expert, Martin Asser, has posted some top tips on the BBC Internet Blog.