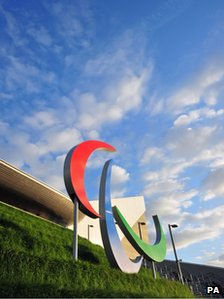 The Paralympic Games start in London on Wednesday. The television rights were awarded to Channel 4 by the organisers, Locog, and although we can't provide live TV coverage, BBC Radio 5 live and Radio 5 live sports extra will provide live commentary and reporting from the Games. Our local radio stations will follow the athletes from their home patches.

BBC TV News outlets will also report the stories of the Games, but we are restricted in the amount of footage we can use to illustrate reports and interviews and our TV crews have limited access to the Olympic Park. The sports news bulletins on the BBC News Channel will be presented live from our studio overlooking the Park, bringing the latest interviews and reaction.

Online, the 2012 portal will pool the best of the BBC's digital offerings across News, Sport and Regions. There will be dedicated Paralympics sections on our web and mobile sites, with the latest news, results, medals table, schedule and photo galleries, and a live text commentary page. And the team from the Ouch! disability blog will provide reports from the various venues, for their own blog and for the News website.

You can read more about the BBC's coverage of the Paralympic Games in this blog from BBC Sport's head of major events Dave Gordon, and this from 5 live deputy controller Jonathan Wall.

Yesterday, on BBC World News, BBC Arabic and the BBC News at 10, we broadcast footage filmed by the New York Times of a group of Free Syrian Army fighters leading the fight for Syria's second city Aleppo. For five days, a team from the New York Times spent time with the so-called "Lions of Tawhid" - charting their battles with President Assad's forces in the city. You can see their full report here.

The BBC report focused on a sequence where fighters built a 300 kilogram bomb in the back of a truck. A prisoner - said to be a member of the Shabiha, a government militia - is seen blindfolded, being taken into the city, where the fighters were said to be planning to use him as an unwitting suicide bomber.

In the event, the bomb failed to explode but the story has generated much interest across the Arab World and beyond. Amnesty International suggested that the video amounted to the attempted murder of a captive, under international law classified as a "war crime".

This year the BBC World Service celebrates its 80th anniversary: cause enough for celebration. But tonight, half a world away, the great and the good will come together to mark an even more extraordinary milestone.

In the 1950s, 60s and 70s, Anthony Lawrence was the BBC's man in the Far East. First in Singapore, then Hong Kong, Lawrence was one of the BBC's "greatest generation" of foreign correspondents - a foreign legion that included legendary names such as Charles Wheeler, Erik de Mauny and John Osman. They built the BBC's reputation around the world, on crackly telephone lines and film flown back from distant shores*.

This weekend, "Lawrence of Asia" celebrated his 100th birthday, half a century after reporting on the communist insurgency in then Malaya, and the ousting of the British.

"Parked cars were set on fire. The steel blinds of shops came clattering down. Doors were bolted and barred. An all-day curfew was announced by radio and loudspeakers. Nobody could leave their houses. And all the streets of this big city were emptied like magic of all human beings, except for the odd mobile police patrol or military squads."

As the sun set on the British empire, Lawrence reported on the Vietnam War. One memorable despatch for From Our Own Correspondent in May 1972 suggests nothing much has changed. Reporting from the frontline with US troops in Vietnam, Lawrence could have been describing Afghanistan today:

"It's such a chancy business, this patrolling. You can go for months and meet nothing, and then three times in one week you meet some awful ambush or firefight. The man next to you goes down yelling with a leg blown off; the platoon commander is bleeding to death against a tree. It's over in 15 minutes, but it's a nightmare; and it may come again tomorrow night."

Much has changed in the four decades since Lawrence left the BBC - everything, and yet nothing. Lawrence's young "apprentice" in the heady days of the 60s was a young David Willey, still filing for the BBC from Rome, and this year himself celebrating his 80th birthday. Lawrence taught him to use the ordinary to explain the significant, the stories of real people - storytelling techniques at the core of contemporary BBC journalism today.

Lawrence moved to Hong Kong in 1958, and was forced to observe China from the outside for more than a decade before the mainland authorities let him in. He set about learning Chinese, and stayed in Hong Kong post-retirement. Having witnessed the suffering across south-east Asia, he founded a charity that helps refugees who flee to Hong Kong.

Tonight, at its famed Foreign Correspondents' Club, Hong Kong celebrates one of its finest adopted sons - and the BBC salutes one of its greatest generation. As the BBC marks 80 years of reporting the world, it is those like Lawrence who made it possible. Every day, we who follow seek to match the gold standard set by Lawrence and his contemporaries. One hundred not out! Happy birthday Tony.

*An earlier version mistakenly stated Lawrence was the last of his generation. But John Osman is still going strong at 80. Apologies.