How has social media changed the way newsrooms work?

Earlier today I gave a talk at the International Broadcasting Convention in Amsterdam about how social media has changed the way newsrooms work. The full transcript of the speech is below.

BBC News, like all major news providers, has been transformed by technology and the opportunities it offers over the last 20 or so years. Social media is the latest tectonic plate to move and change the landscape.

It may seem like re-stating the obvious but looking in our rear-view mirror back along the road of technological change shows just how news has changed: typewriters out, computers in; newspaper cuttings libraries closed as the internet opened access to information; mobile phones rather than messages at hotel receptions; satellite technology to feed material rather than tapes put on planes and so on.

As we'll hear from my colleagues here later, all big news organisations are plunging into the world of social media, looking at its extraordinary newsgathering potential; its potential as a new tool to engage the audience; and as a way of distributing our news.

The BBC, as an early presence on the web, also spotted the possibilities of social media quickly and it has become a highly important and fast-moving part of our multimedia newsroom, as I will outline shortly.

The other area I will also touch on is the range of new challenges and questions that social media poses for the established news providers - like the BBC, CNN, Sky and al-Jazeera.

First, the practical role and influence of social media in the BBC's multimedia newsroom and for BBC News as a whole.

• newsgathering - it helps us gather more, and sometimes better, material; we can find a wider ranges of voices, ideas and eyewitnesses quickly

• audience engagement - how we listen to and talk to our audiences, and allowing us to speak to different audiences - and

• a platform for our content - it's a way of us getting our journalism out there, in short form or as a tool to take people to our journalism on the website, TV or radio. It allows us to engage different and younger audiences. 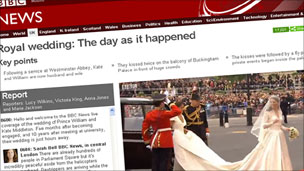 The BBC already has a fair track record of inviting the audience to get involved in our journalism - web forums; debates; blogs and comments, and most recently incorporating comment within our website story pages, particularly on the live pages.

We are proud of the standards we have set in processing, sifting and verifying material sent to us and sourced through social newsgathering, giving us a new dimension when telling some of the major stories of recent times - the Japan tsunami; the Arab Spring; the Burma uprisings; the Norway shootings; the riots in England.

The team we have allows us to fully engage in using this material, and reinforce the BBC values that our audience expects, in particular accuracy. So we managed to avoid, for example, use of the photo-shopped Bin Laden body photo after his killing.

Many of our leading journalists and presenters now incorporate social media platforms into their work: Tim Willcox; Lyse Doucet; Robert Peston and until recently Laura Kuenssberg (who has now been joined by her Twitter followers, with our blessing, at ITV News).

We've innovated, experimenting with branded hashtags to curate coverage; visualising Royal Wedding day tweets on our website; and work is under way to seamlessly integrate field despatches from our correspondents and reporters into our core news services and social media output.

And like many established news providers, we have created an open and modern set of guidance to help our staff engage, gather news and spread their journalism, working within the BBC's editorial values that are at the core of our journalism.

Here's a short video we've just made to illustrate briefly the role of social media right now in the BBC Newsroom.

However, now I'd like to add just a little context to the growth of social media for the audiences of BBC News.

Since its launch Twitter has obviously seen rapid growth. 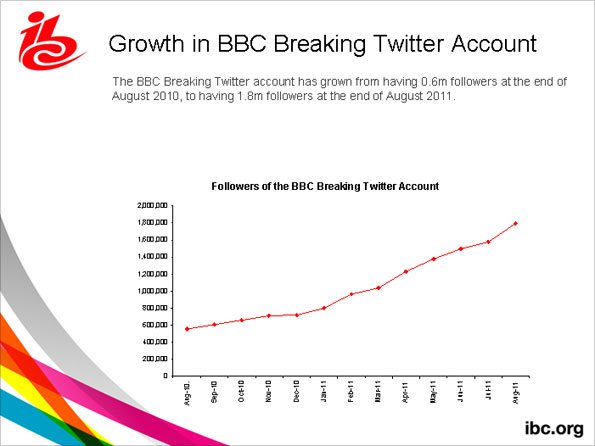 Look at the @BBCBreaking account which has increased its number of followers very rapidly even in the last 12 months.

It looks impressive, and it is, but compare that with consumption via the website, which has also grown very rapidly, now attracting an average 9m users a day.

And still the home of our biggest audiences by a country mile is TV News with the BBC News Channel's average weekly audience up 50% in the last year, and the BBC1 TV bulletins reaching 17.5 million viewers in a week.

Social media has strong growth and huge potential - it's a great tool for our journalism, as we've seen, but for the BBC, still draws relatively small numbers. I would say a "small" but highly engaged, dedicated and vociferous part of our audience.

And that leads me on to the second main area I would like to address - and those are the wider challenges presented to so-called "traditional" media by social media.

For good or for ill - and sometimes it is for good, and sometimes not, social media has trashed many of the foundations on which "traditional" media stands. And in all honesty I can raise questions about this but I don't think we yet have all the answers:

• Privacy. In particular privacy of the individual, where are the boundaries? Are there any areas off limits? It seems we can all discuss pregnancies, affairs, ethics, finances, abilities, families. It's out there on Twitter and Facebook and there's no real protection for what, until now, has been largely personal or private.

It leaves traditional media in a very different universe. We mitigate this via very clear guidelines to our staff, which states that although content placed on social media or other websites "may be considered to have been placed in the public domain, re-use by the BBC will usually bring it to a much wider audience". They go on to say that: "We should consider the impact of our re-use, particularly when in connection with tragic or distressing events."

• Anonymity. Many people joining the debate or discussion or sometimes accusing, or attacking, have no name and no face and therefore no seeming personal responsibility for the impact or truth or validity of what they publicly say. Professional journalists, like ours, encouraged to engage in social media spaces but held to account for their views and values, often find themselves engaged in a wholly uneven discussion on coverage or stories with an invisible opponent.

• Ethics. Most of us work within an ethical framework. We won't report the death of a loved one until the family know; we won't just steal material from others; we try to establish facts before pushing a story out there. These are all fundamental and long cherished principles of the way BBC News operates. But not the ground rules of many using social media.

• The Rule of Law. We work within the laws of our land - we avoid libel; or contempt of court; or revealing the names of young victims or juveniles accused of crimes. We don't break court injunctions. Some social media users do many of these things.

Sometimes it has been argued they show up the failings of the laws of the land, and they may do, but often it is done in ignorance of the law, or simply on the assumption that it doesn't matter. And that can leave traditional media looking slow or stick-in-the mud or somehow part of an "establishment" that doesn't tell the whole truth. Look at the case of Ryan Giggs.

• The role of traditional media. Some of our role is probably gone. Will we be "First with the Breaking News"? Probably not in many cases. Someone on Twitter will be. Will we have the first still of a hero or victim? Facebook probably will have it. Will we get the first video out of Syria or Burma? YouTube will almost certainly have it posted first, although we'll often be one of the first to verify it's genuine (or not).

• Audience interaction. This can be a great way of hearing what your audience has to say, and answering questions or engaging. We have sophisticated ways of measuring what our audiences consume, and we keep an eye on what's being said to us and about our content, all of which we consider in our editorial discussions.

However there's a real danger lurking here - namely that we mistake the squalls on Twitter or the views of ten or 20 vociferous tweeters for the view of the audience as a whole. It may be that it is, but it often isn't, and we shouldn't necessarily be swayed in our editorial judgements by a noisy but small row on Twitter.

These are some of the challenges we face with social media and we grapple with them every day.

But you can take those challenges and say that the uncertainties they introduce can actually underline the strengths that established news organisations have, for a very large part of the audience.

In the sea of many voices and stories of claims and general noise, we know there remains an appetite for a journalism that is based on the values that news audiences of "traditional" organisations' like the BBC value most highly of all : truth; accuracy; integrity; verification; independence; and yes, speed. The new environment we are all living in can underline in the audience's mind the values of our journalism.

Lastly, social media shines a powerful light on all that we do. It can be uncomfortable at times but it is ultimately a great thing. It will help keep us all honest. Those traditional organisations who abandon those core values and aspirations will be found out - there is unrelenting examination of all we do - and those who don't live up to their values will quickly surrender their value to audiences in this new world.

Kevin Bakhurst is deputy head of the BBC Newsroom