Our coverage of Libya

At the Imperial War Museum's northern outpost in Salford, a special exhibition celebrates the ranks of Britain's war correspondents - among them Winston Churchill. Before becoming a celebrated war leader, he found fame as a war reporter for the Morning Post during the Boer War. More than a century on, those same skills of courage and drive displayed on the battlefields of South Africa have been seen in Libya. 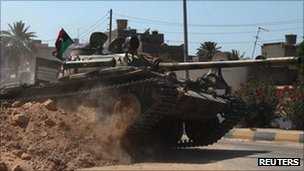 It takes real bravery to head towards the sound of gunfire and explosions when any right thinking person is running away - a courage shared not just by the correspondents but the often, unsung heroes, the producers, crews and engineers who get them on the air.

For much of the past week, the BBC has been the only UK broadcaster reporting from Tripoli - a five-strong team led by correspondent Matthew Price has holed up in the capital's Rixos Hotel, unable to go out unless "escorted" by Gaddafi government minders.

As parts of Tripoli fell, Matthew described his routine in a piece for the BBC News website - dinner in body armour and helmets, fear stalking the corridors as government officials abandoned the international media to their fate.

When Nato bombs started raining down on Libya, our Tripoli Correspondent Rana Jawad went into hiding. Being the BBC's correspondent in Gaddafi country was never easy at the best of times. But Rana refused the chance to leave: her life and her family was in Tripoli - and for five months, she filed a series of reports, billed only as a Tripoli Witness describing life in the capital.

At the BBC, everyone who works in a war zone is a volunteer. Like Rana, they make the decision to stay or go. Last night in a highly volatile situation, the BBC team in Zawiya, along with other major broadcasters judged it was not safe to continue with the rebels on the road into Tripoli.

Alex Crawford of Sky News took a different view and has rightly been praised for some compelling coverage. I congratulate her on her tenacity - it made for extraordinary television. But to illustrate the dangers facing those in Libya, this morning that same BBC team, led by Rupert Wingfield-Hayes came under fire as they entered Tripoli. The team is safe - but the footage which you can see here is terrifying.

Against this background we have succeeded in delivering comprehensive coverage of events in Libya since the uprising started in February. We have reported from Benghazi, Misrata and the advancing front line. Dozens of colleagues from many news organisations have risked their lives over the past five months to tell a hugely important story.

As I write, the fight for Tripoli is not over yet and some are still risking everything to ensure we can give our audiences - including those in Libya - first hand, "eyewitness" reporting. I could not be more proud of them.