BBC's reporting of the economy

The Chancellor George Osborne gave an interview to Sarah Montague live on Radio Four's Today programme this morning. You can listen again here. During that interview he strongly suggested that the BBC's approach to reporting the economy was relentlessly to focus on the bad news and the most gloomy statistics. 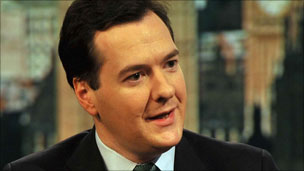 Ordinarily, we're pretty used to these sorts of claims, part of the political rough and tumble. We regularly receive calls from both Mr Osborne's team and the opposition very keen that we more heavily report this or that statistic, or de-emphasise a particular figure that is less helpful to their stance.

However, Mr Osborne was public in his criticism of how we are doing and chose to give three concrete examples of where he thought we had gone wrong. We feel it merits a response.

1) Mr Osborne claimed that comments made recently by the OECD's chief economist Pier Carlo Padoan, which seemed to suggest the UK might have to change its deficit reduction strategy if growth stayed weak, had been over-interpreted by the BBC.

In actual fact, it was our judgement that these comments had indeed been over-interpreted elsewhere in the media and we made a conscious decision, after an early report, not to report the comments prominently on any of our outlets throughout the day and that evening.

You can read our online piece on the story here and see if you agree it has over-interpreted Mr Padoan's comments as the chancellor asserted.

2) Secondly, Mr Osborne claimed that, after listening to BBC output for the last year, he had yet to hear a single item that large numbers of jobs had been created.

In fact, had the chancellor been listening carefully to Today just an hour earlier (he seemed to suggest he had been but may have missed it) he would have heard our economics editor Stephanie Flanders say clearly that over the last year employment has been very strong and that private employment was especially strong.

Viewers of our main Six and Ten O'Clock News bulletins will know that virtually every single time we report unemployment figures we also give the employment figure for fairness and balance.

It's also worth noting that in our heavily read online coverage we have reported on at least seven job creation stories in just the last few of weeks. Here are a couple of those as examples of this.

3) Finally, the chancellor observed that we only report manufacturing surveys which are disappointing and gave the example of a disappointing Markit survey last week and today's more positive Engineering Employers Federation survey.

In reality, we gave very little coverage last week to a set of three Markit surveys, including one showing the manufacturing sector grew at its weakest pace in almost two years in May. On the other hand we have indeed covered the EEF survey today. There are a large number of market surveys and data each day and we attempt to make the best judgement we can about the editorial strength of the story.

At this point I should say we don't always get it right. Sometimes we may over-emphasise or under-emphasise something. That always ensures a lively and valuable editorial discussion in the newsroom. Very occasionally we may miss something interesting completely, though we'll try to catch up as soon as we realise.

While we understand the political context around all our business and economics reporting, our sole purpose is to report and put context around the data for the benefit of all our audiences, reflecting that there are differing points of view and analysis which may occasionally make uncomfortable reading from both sides of the political divide.

Jeremy Hillman is editor of the BBC News business and economics unit.