Coverage of the TUC rally

The news coverage of the BBC, perhaps more than any other media organisation, comes under intense scrutiny for fairness and impartiality. This is as it should be. Licence fee payers represent the views of the whole country and they have a right to expect that the BBC reflects the diversity of their views. 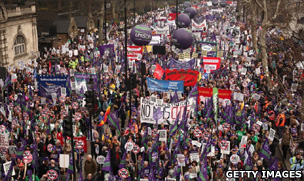 But, to paraphrase Abraham Lincoln, this past weekend has highlighted just how difficult it is for an impartial broadcaster to please all the people all of the time.

The extensive BBC News coverage of the TUC rally in central London featured interviews with major figures on the march, protestors and critics. Supporters were challenged regularly - and robustly - on their alternative to the Government's programme and the Cabinet Office Minister Frances Maude featured prominently throughout a day of rolling news. We also tried to set in context the relatively small scale of the violent demonstration and to put across the views of the vast number of peaceful marchers.

Despite all this the BBC finds itself criticised by one prominent MP and several newspaper columnists for being biased towards the protestors - at exactly the same time as fielding complaints from people who thought that we were too hard on the demonstrators and their cause. This was a big news story and feelings about the Government's economic programme run high on both sides.

It is perfectly true that it is sometimes difficult to strike the correct balance and I hold my hands up when we don't get it right. On this occasion, though, I think the BBC did serve its audiences appropriately and thoroughly.