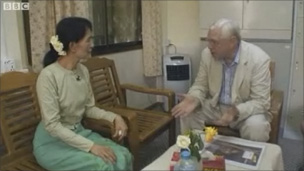 I should declare an interest: its author used to be my boss - twice! Richard Sambrook was director of News and most recently director of Global News; as the BBC's head of newsgathering, he helped build the network of overseas bureaux and foreign correspondents it is my privilege to lead.

He suggests that economic pressures and digital technology are undermining the role of the foreign correspondent - although his argument is more nuanced than the paper's title suggests. The paper should probably be called Is The Traditional White Male Ex-pat Correspondent Working From An Office With A Satellite Link To London At Risk? In that case, the answer would unquestionably be "yes" - but the title exaggerates to makes its point.

I can tweet as well as the next man (@WilliamsJon is my personal account, since you ask). But the idea that Twitter or other social media can replace rather than complement traditional, mainstream reporting is fanciful. Actually, I'd go further and suggest it's an opportunity rather than a threat.

In a world of more "noise" from the blogs and social networks, there's a craving from the mainstream audience for a "trusted guide" to make sense of it all - they want someone to help explain what matters and what doesn't. That's why even among the "networked" followers of Twitter, hundreds of thousands of people subscribe to the BBC's breaking news feed (@BBCBreaking) and thousands more follow the likes of Robert Peston, Rory Cellan-Jones and Laura Kuenssberg.

And just because someone random says - or tweets - something, it doesn't mean it's true. Three weeks ago, the blogosphere and the rest of the net were awash with rumours that Aung San Suu Kyi had been released hours before she was set free. Ironically, it was perhaps the most "traditional" foreign correspondent, John Simpson, who was there to tell the world of her actual release - in the same way as he has been doing for more than 40 years.

Richard is right to suggest that the "traditional" model is changing. I'm proud we have a more diverse reporting team than ever - though we also have more to do. The latest generation of foreign correspondents is as happy behind the camera as in front of it, filming as well as reporting. And broadband access means the spare bedroom can become a TV studio when the big story breaks.

But these aren't threats to the foreign correspondent; they're a chance to renew the relationship between the eye-witness reporter and the audience. The paper concludes:

"[T]he independent witnessing of events has been the core purpose of foreign reporting from its earliest days and will remain so for the future."

Phew! The foreign correspondent may no longer be the only voice in a "networked world", but he or she can be the most trusted voice. In an ever more complex world, they are far from being redundant.