Two years ago Russia went to war with its tiny neighbour, Georgia. In five days of fighting Georgian forces were heavily defeated.

Who started it and why was hotly contested at the time, something I blogged on then.

The conflict had several immediate results.

Relations between Moscow and Tbilisi went into the deep freeze. Russia and three other countries recognised the independence of the breakaway Georgian regions of South Ossetia and Abkhazia. And relations between Russia and the West - the US and the EU - deteriorated to their worst level since the end of the Cold War - there was even a revival of Cold War rhetoric.

Some commentators said at the time that Russian foreign policy had taken a decisive anti-Western turn and things could and/or should never be the same again.

But here we are 24 months later and those predictions couldn't appear more misplaced.

Russian relations with Georgia remain hostile, although the border has reopened in places and some business links remain. 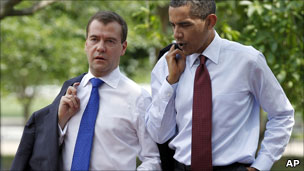 But over the past year relations with both Washington and the EU have improved dramatically.

One of President Obama's most successful foreign policy initiatives to date has been the "reset" of relations with Russia that has led to a new nuclear arms control agreement, START 2, but Washington appears to have been pushing at an open door.

When it comes to Europe, the Russians have reached out to their arch rivals, the Poles, as a way of demonstrating they want to improve relations with the wider EU, damaged by disputes from the disruption of gas supplies via Ukraine, to murder of the Russian exile, Alexander Litvinenko, in London and the harassment of the British ambassador to Moscow by the nationalist youth organisation, Nashi.

What lies behind this change of policy in Moscow?

The reasons for the change of approach from Russia were outlined in a leaked Foreign Ministry paper in May and they appear to be highly pragmatic.

President Medvedev and Prime Minister Putin want to modernise the Russian economy, including its ageing oil and gas infrastructure, and diversify away from its huge reliance on energy exports and they think they need good relations with the Western economies to do that.

This kind of incremental shift is quite a challenge to cover on a daily news programme given there are often seemingly more pressing news stories on a daily basis that knock the smaller stories of signs of policy change off running orders.

So occasionally at The World Tonight, we decide to devote special coverage to a significant issue and this Friday it's this.

We'll be reporting from Georgia (Tom Esslemont: Georgia and Russia still bitter foes amid scars of war) and Poland (Paul Moss: Russia unleashes charm offensive on Poland); talking to senior European and Russian leaders; and discussing what lies behind this change with a panel of experts in Russia, the US and Germany.

But already one lesson that comes through from the past two years seems to be wary of ever thinking nothing will be the same again.

Alistair Burnett is the editor of The World Tonight.