The claims made against Question Time by various publications and commentators are clear: it was a "typical BBC conspiracy". The audience was clearly "rigged" to ensure a "lynch-mob mentality". The "usual Question Time format was changed" to focus entirely on the BNP and to "ignore general topics of the week". David Dimbleby pursued a "personal attack against Nick Griffin". And the "publicity-seeking" programme "did it all for the ratings".

So much for the charges. The reality is a bit more straightforward. 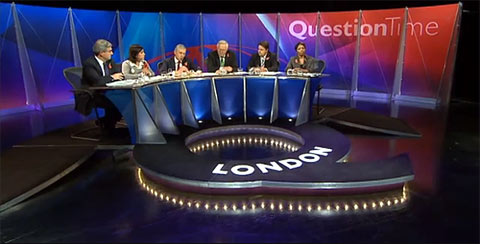 As in any Question Time week, members of the public guide producers on what's to be debated. The programme is driven by the questions submitted by the audience itself. And unsurprisingly, they chose to focus on topics that were in the news this week - immigration, Jan Moir's article on the death of Stephen Gately, the BNP's co-option of historical figures and, yes, Question Time itself.

What, no post strike? No Afghanistan? They were on the list of issues to be debated. But, from the weight of questions, other topics galvanised our audience more, and there simply wasn't time to get to them. This isn't a stopwatch tick-box format. A question might take ten minutes to debate. Or twenty. It is the audience and its members' engagement in an issue which leads the content of the debate. They demand their say and ensure that answers are properly scrutinised.

That means editorial fluidity and flexibility. As in Grimsby and Salisbury earlier this year, occasionally one topic dominates, because the public just doesn't want to move away from it. Back then - as you may have spotted - it was MPs' expenses. This week, it was the BNP and its beliefs and policies, albeit encompassing questions on race, Islam, homophobia, immigration and Churchill. So we didn't change the format. Questions, and debate, just are the format. And again it's the audience which guides it.

And so to the "rigged audience". The audience, as always, was made up of a broad cross-section of views and backgrounds reflective of the location. That would be the same whether we were in Liverpool, Llandudno or - as in this case - London. Every week, they're encouraged to participate and to ask probing questions to provoke debate. So: were BNP supporters invited and allowed in? Yes. In fact, they made more than one contribution to the discussion. Was that enough? Did they applaud sufficiently or counter the boos directed at their party leader? Hard to judge. But who needs to? That's the thing about people who come to see Question Time - they have minds of their own.

As does David Dimbleby. His job was not to "get" Nick Griffin, or to "expose" him as a racist and crush him in public. It was to chair a debate. Which he did, brilliantly. That meant giving not just the audience members their say, but panellists too. All of them. And probing panellists - all of them - on past policy, utterances and beliefs. So David did indeed forensically grill Mr Griffin on everything from the Ku Klux Klan to the Holocaust. And likewise Jack Straw was questioned over government immigration policy. Sayeeda Warsi on civil partnerships. Not ganging up against one member of the panel. Just robust questioning to achieve clarity. It's what the audience expects - every week.

Chasing ratings? Question Time has been going for 30 years and has very healthy viewing figures, rising to a recent record peak throughout the past series. The decision to invite Nick Griffin onto the programme had nothing to do with ratings. It had to do with our obligation to show due impartiality and the fact that only now has the BNP crossed a particular electoral threshold in securing European parliamentary seats. (See a previous post by my colleague Ric Bailey.)

But the key manner in which this was Question Time as normal is that it was unpredictable. Week in, week out, none of us involved in the programme has any idea how the audience will react, what will anger or amuse them, whether this or that panellist will shine or sink or even whether a cat called Tango will wander behind the set while we're on air (Google it. You'll get the drift).

But amid all the normal unpredictability, one question remains the same every week. Did it work? And, as is the answer to everything with Question Time, you decide.

Update 1515, 24 October: The document that appeared in both the Daily Mail and on its website today is not, contrary to the claim by the Daily Mail, the same document issued to members of the Question Time audience.

There was only one instruction guide given to members of the audience and it is the same format as issued every week. The BBC instructions always begin with the panel member from the government - in this week's case Jack Straw.

On the version printed in the Mail, the Nick Griffin entry has been placed over that of Mr Straw.

As a result, Mr Griffin's entry appears twice in the version on the Mail's website and Mr Straw not at all.